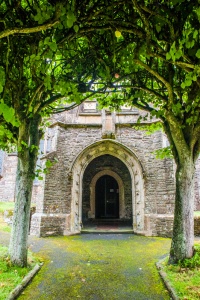 Hieritha, or St Urith as she is sometimes called, was a little known 7th-century saint born at Stowford, in north Devon. She may have been converted to Christianity by missionaries from the Abbey at Glastonbury, who began arriving in north Devon by the 6th century.

The traditional story of her life and death says that when the village was struck by drought, Hieritha's stepmother feared that the drought was caused by her step-daughter's new faith. She incited several haymakers to decapitate Hieritha with their scythes.

On the spot where Hieritha fell, a stream burst forth from the earth and scarlet pimpernels began to blossom. The stream fed into a well, whose waters were reputed to have healing properties. A chapel was built on the site of Hieritha's murder, and became a focus for pilgrims.

In the 1950s the North Devon Water Board decided that the well was a risk to public health and had it covered over with concrete. A manhole cover was inserted to give access to the well, which is blessed annually by the vicar on 8 July. The villagers periodical re-enact 'their' saint's martyrdom in pageants.

Hieritha is usually depicted carrying a scythe in one hand and her own head in the other. 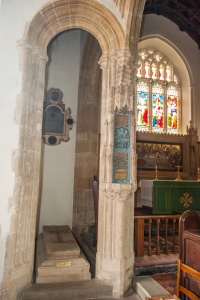 The story of Hieritha's death and the healing waters that sprang up where she was martyred is similar to several other stories of early saints. This has led some historians to suggest that Hieritha was actually killed by a band of Saxon raiders from Somerset.

The roots of St Hieritha's church go back to the 8th century, when it was erected on the site of Hieritha's murder. The church was completely rebuilt from 1470, giving us the beautiful Perpendicular Gothic building we see today.

The striking tower is one of the finest in Devon and can be seen for a wide distance across the surrounding countryside. It may seem odd that such a small village should have such a large church with an imposing tower, but it was the offerings left by generations of pilgrims that allowed the villagers to pay for such a grand edifice.

Within the belfry are some of the finest bells in the West Country, and campanologists (bell-ringers) travel long distances to play them.

While the tower and its bells are worth a mention, the real reason most people visit the church is to see the site of Hieritha's grave. The saint is very likely buried in a small chapel on the north side of the sanctuary, under a medieval grave slab commemorating Joan Cobley. Above the grave is an empty niche would would originally have held a statue of the saint. Above the niche is a tablet to John Bear (d.1656), with roundels for his 3 children. 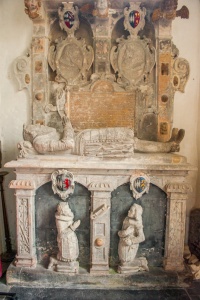 Nearby is the slender stone pulpit in wineglass style, carved around 1500, with a panel depicting St Hieritha holding the foundation stone of the church in one hand and a martyr's palm in the other.

Other highlights include the ornately carved 16th-century font and a worn 14th-century parish chest.

The most impressive monument is in the north aisle and commemorates the Giffard family. It was erected in 1625 by John Giffard, ostensibly to remember his grandfather, but in fact it commemorates 5 generations of the family.

Against the wall of the Giffard Chapel is a reclining effigy of Grace Giffard (d. 1667).

Opposite the Giffard Chapel is the Rolle Chapel, which occupies the entire south transept. On one wall is a large 18th century marble wall monument with a self-laudatory inscription to the Rolle family 'Whose lives have left to posterity a more expressive Memorial than can be perpetuated on the most Durable Marble'. On the east wall is a tablet to Edward Yeo of North Petherwin (d. 1636).

Most of the waggon roofs still retain their 15th-century timbers, decorated with elaborately carved bosses.

St Hieritha's is a superb late medieval church, with a wealth of historic features to enjoy. Don't miss it. 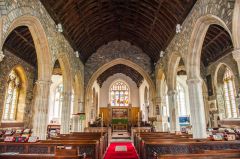 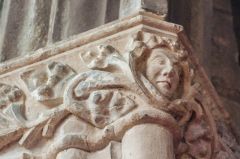 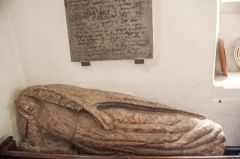