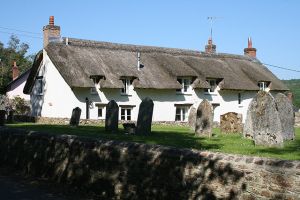 Upottery is a small village nestled in the Blackdown Hills Area of Outstanding Natural Beauty, on the River Otter, from which it takes its name. The village was mentioned in the Domesday Book, but even before then, it was part of a grant from Edward the Confessor to the Dean and Chapter of Rouen.

At the time of the Domesday Book, the manor was held by a Saxon woman named Ulvera, but William the Conqueror promptly granted it to the Canon of St Mary at Rouen. Henry III transferred the manor to William de Chayney in exchange for £100 to the abbey at Rouen and an annual rent of one pound of wax to the church at Ottery St Mary.

Henry Addington, Prime Minister from 1801-4, lived in Uppottery. Addington was later named Viscount Sidmouth. The local water fountain was given in honour of the 4th Viscount in 1915. The local pub is called the Sidmouth Arms.

The manor house is long gone, and in its place is a farm known as Manor Farm. The old manor had the right to issue its own banknotes. Today the village hall is called the Manor Room. It was built around 1880 as a gift to the village from Lord Sidmouth.

The parish church of St Mary was built in the 12th century, and largely rebuilt in the 15th century. It is made of local stone with Beerstone detailing, and warm-toned Hamstone on the upper stages of the tower. The nave arcade and the tower arch are 15th-century work, with the column capitals decorated with foliage and angels bearing shields.

A large number of 17th-19th century grave slabs are set into the floor. The octagonal font is late 15th century. The only memorial of note is to John Hutchins (d. 1709) and his wife Katherine (d. 1707). There are also a pair of funeral hatchments to the Sidmouth family in the nave.

Outside the village is RAF Upottery, a disused airfield. The base opened in 1944 and was used by the RAF, US Army Air Force, and US Navy during World War Two. The US 101 Airborne Division flew from Upottery on their first parachute combat jump into Normandy on D-Day. The base closed in 1948 and the site is now part of a local farm. 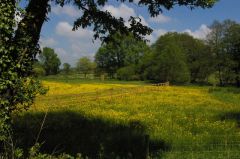 More self catering near Upottery >>

More bed and breakfasts near Upottery >>