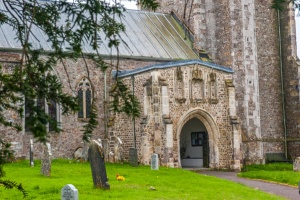 The 1520 south porch and churchyard

The history of Broadhembury owes much to a jilted lover. Before the Norman Conquest the manor of Hanberia (Broadhembury) was owned by the Saxon nobleman Brictric, Thane of Gloucester. Now Britric had an admirer, a Norman noblewoman named Matilda, but when she made her interest known, Brictriic rejected her, a move that would backfire spectacularly. Matilda married the illegitimate son of Robert, Duke of Normandy, a man better known to history as William the Conqueror.

When William defeated King Harold at the Battle of Hastings in 1066 and gained the throne of England, Queen Matilda had her revenge. Britric's estates were seized, and Broadhembury was given to William's half-brother Odo, Bishop of Bayeux. From Odo it passed through several hands until it was granted to the monks of Dunkeswell Abbey, six miles away.

It is possible that there may have been a church here since the Norman period, but we are on much safer historical ground when it comes to the present building, which was consecrated in 1259. Most of the 13th-century church was swept away in a comprehensive rebuilding in the late 15th century.

The building is made primarily of flint and Beer stone, with local greensand and red sandstone. 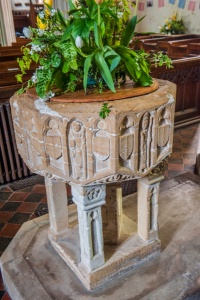 The tower dates to 1480 and stands almost 100 feet high. There is a niche, now empty, set into the tower wall, which must once have held a statue. Note the grotesque gargoyles near the battlemented top of the tower.

The elaborate porch dates to 1520, with more canopied statue niches outside. There is very finely crafted carving detail around the doorway arch, and over the doorway is a statue of St Andrew the Fisherman, sculpted by the former master mason of Exeter Cathedral. Inside the doorway is an early 19th-century coat of arms, probably to George III or his son, George IV.

One of the most impressive features inside the church is the 15th-century roof, with vividly painted timbers. The painting was hidden for centuries under plaster and accidentally exposed during repairs in 1930. The bosses at the east end retain some traces of paint.

In the north wall are a pair of 14th-century windows, and the large window beside the pulpit dates to 1470. The window has very finely carved decoration, including flying angels and a couple with ornate headdresses.

The font is 15th century, in Perpendicular style, and of an unusual shape. It is intricately carved with figures of saints, a priest, 2 bishops, and a cowled monk. The font is badly damaged, perhaps during the Civil War. 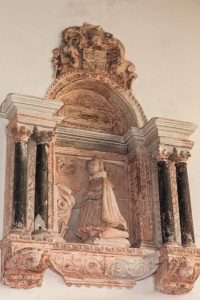 The most impressive monument is on the north wall of the sanctuary. It dates to 1619 and was built in memory of Adrian Moore, a relative of the Drewe family who held the manor of Broadhembury for over 300 years. Moore is shown kneeling at a prayer desk surrounded by symbols of mortality.

There are more memorials to generations of the Drewe family, including an opulent memorial in the Lady Chapel to Edward Drewe, whose funeral helmet is set upon the wall. In the chancel is a 17th-century wall monument to Sir Thomas Drewe, showing him kneeling between a pair of Corinthian columns.

In the south chancel chapel is a late 17th-century monument to Francis Drewe (d. 1675), with traces of gilding and paint still visible. In the sanctuary is a wall tablet to Augustus Toplady, author of the popular hymn, 'Rock of Ages'. Toplady died in 1778, but the monument was erected in 1898.

Look for a small fragment of board painted with the IHS symbol. It is all that remains of the medieval screen, which was removed during restoration work and accidentally destroyed in a fire.

Beside the village school is Church Gate, the oldest house in Broadhembury, which probably served as the medieval priest's house. Over the years it has been a poor house, a reading room, and a schoolroom. Opposite the church is the Manor House, built in Art Nouveau style in 1901 by Julius Drewe.

St Andrew's is a delightful country church in a very pretty village. 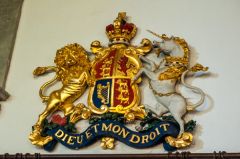 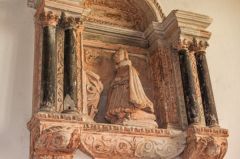