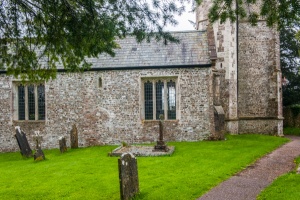 Offwell village may have gained its name from a Saxon named Offa. An ancient well near the village crossroads may be the original 'Offa's well'.

St Mary's church was begun around the year 1200, though it seems very likely there was an earlier building on the same spot. The first known tenant of the manor was Gervase de Offewell (1219) and it may have been Gervase who built the Norman church.

From 1773 the Copleston family held the manor of Offwell, and owned the church. They also supplied rectors for over a century. The most famous of these rectors was Edward Copleston (1776-1849), Bishop of Llandaff and later Dean of St. Paul's. Copleston was born at the rectory and was responsible for restoring the church, and sweeping away many of the medieval features. He also built nearby Offwell House and the tower on Honiton Hill.

The best-remaining features of this Norman building are the chancel arch and a round-headed window in the south wall of the chancel. That early building consisted of just a nave and chancel, but over the following several centuries the building was enlarged with the addition of a north aisle and west tower. The church is built of flint and chert, dressed with Beer stone. 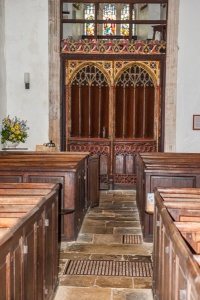 Looking down the nave
to the tower screen

The nave and aisle roofs are probably 15th century, though the carved bosses may be 19th-century replacements. Most of the woodwork, including the altar rails and stalls, are 19th century, though the lectern includes 17th century carved panelling. The finely carved pulpit dates to 1724 and cost £24. The pulpit stands in a much earlier medieval pulpit of stone.

In the north chapel is a 15th-century font. The octagonal bowl is carved with quatrefoil panels and decorative foliage. The font cover is 17th century and is toped with the figure of an eagle. 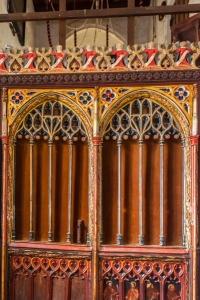 The beautifully carved reredos is 16th-century Flemish work. It was probably installed in the church by Bishop Copleston. The centre panel shows Jesus carrying the cross and the side panels show the Evangelists.

The oldest monument in the church is to Joanna Southcott (d. 1696). In the chancel are a very good group of 19th-century marble monuments, most to members of the Copleston family. Above the south doorway is a memorial to John Ford (d. 1729) and his wife Mary (d. 1742) and on either side of the doorway are 19th century painted boards depicting the Ten Commandments.

The east window of the chapel contains good 18th-century glass, and the south chancel window holds fragments of medieval glass. The organ was made by 'Father' Willis, one of the great Victorian organ makers, and installed in 1859.

The other historic feature I really enjoyed was the wonderful carvings on the capitals of the columns in the nave arcade. One carving shows a peculiar beast, perhaps a lion, sticking its tongue out, while another depicts a Green Man, foliage issuing from his mouth.

One intriguing series of carvings shows a group of men in robes wrestling; at least that was my first impression, though one man has his robe thrown up, exposing his bare bottom. It isn't clear what the carvings represent, but they certainly appear to be pushing the boundaries of good taste. Perhaps there's a morality tale message there that has been lost over the past 600 years! 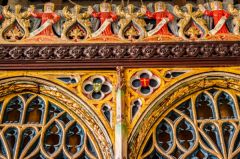 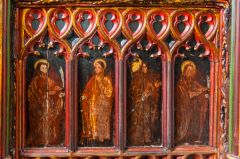 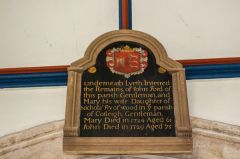 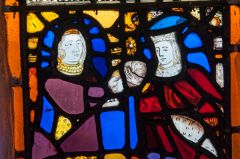 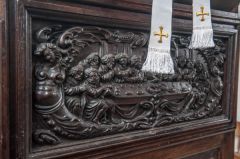 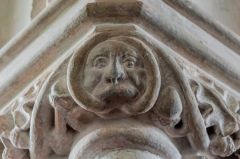 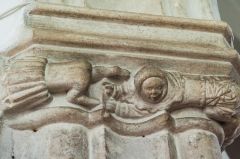