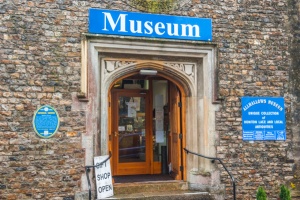 Honiton Museum, or, to give it its full title, Allhallows Museum of Lace and Antiquities, is located in the oldest building in Honiton. Allhallows boasts the largest collection of Honiton lace in the world, and has an astonishing wealth of local heritage information packed into a small historic building.

Sometime in the early 14th century, a roadside chapel was built to serve travellers passing through Honiton. We do not know exactly when the chapel was built but it was certainly before 1327. In the 16th century a school began meeting in the chapel. Again, records are not clear, but it seems likely it was a school for choirboys, teaching them to read, write, and sing Latin verse. The chapel was seriously damaged in a fire in 1765.

The remainder of the chapel was used as a schoolroom by Allhallows Grammar School. Then in 1903 it was returned to use as a chapel, dedicated to those who lost their lives in the Boer War. During the Second World War the chapel served as a first aid post.

After the war ended the chapel was reopened as a local museum, specialising in the history of Honiton and its lace industry. The historic chancel of the chapel is now home to the Murch Gallery of local heritage. 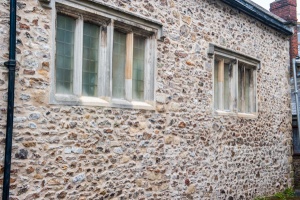 The rear of the 14th-century chapel

The focus of the Allhallows Museum is all things Honiton, but there is a fantastic display of Honiton lace, tracing the history of lacemaking in Honiton from the 16th century to the present. The most obvious characteristic of Honiton lace is that designs use a 'sprig', a depiction of a leaf or flower. The sprigs are usually made separately then sewn into a lace net to form the finished design.

It is hard to describe just how impressive the lace display is. You simply have to see it in person to realise just how intricate and exquisitely detailed the pieces of historic lace are. Among the exhibits is the first written evidence of lace production in Honiton; a brass plaque from the tomb of James Rodge, dated 1617. There are also pieces of black lace used by the Victorians as a symbol of mourning.

There is more to Honiton than lace, however. The museum looks at local archaeology, with finds of fossils and historic artefacts from archaeological digs in the area.

The most famous of the archaeological finds is the Honiton Hippo, the fossilised remains of a hippopotamus found during construction of a bypass road in 1965. The hippo is thought to have lived 135 million years ago, during a warm interlude in the Ice Age, when southern England had a climate similar to that enjoyed by modern Africa. The best-preserved part of the Honiton Hippo is a set of cheek teeth used for grazing on grass and other vegetation.

In the Murch Gallery are examples of Honiton Pottery. The pottery began in 1881 and went out of business in the 1990s. Another display showcases historic objects unearthed by the East Devon Metal Detecting Club, including Bronze Age, Roman, and medieval finds.

There is a special exhibit on Allhallows School, including school paraphernalia and mementoes. Perhaps the most famous student of Allhallows School was Sir Arthur Travers (Bomber) Harris, head of Bomber Command in the latter stages of WWII.

There is also an exhibit on the Borough of Honiton, including the costume used by the Town Crier, a fully furnished Victorian dollhouse, local trade tokens and coins, war memorabilia and children's toys.

I found the museum extremely enjoyable to visit, and if you enjoy lace, this is the place to come!

More self catering near Allhallows Museum of Lace

More bed and breakfasts near Allhallows Museum of Lace