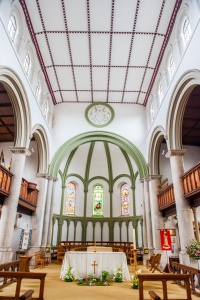 The high altar and narthex

In 1406 a church dedicated to St Michael was built on a hill overlooking the growing town of Honiton. For over 400 years St Michael's served the needs of the town, but the focus of settlement gradually moved away from the church, and by the early 19th century it was no longer large enough or convenient enough for its parishioners.

In 1835 a new church was begun on Honiton's busy High Street, beside Allhallows chapel (now the local museum). Part of the chapel building had to be pulled down to make way for the new church, dedicated to St Paul and designed by Charles Fowler of London.

Charles Fowler was a Devon native, born in Cullompton in 1792 and educated in Exeter before apprenticing to an architect. He moved to London in 1814 and trained under David Laing, helping Laing with the Custom House in Newham, London.

He then set up his own private practice where he specialised in classical style. He won the public competition to design the new London Bridge, but his plan was later rejected by a House of Commons committee. His most famous commission was Covent Garden Market, designed for the Duke of Bedford from 1822.

Due to the orientation of the High Street site Fowler had to design the new church on an unusual north-south axis rather than the usual east-west. 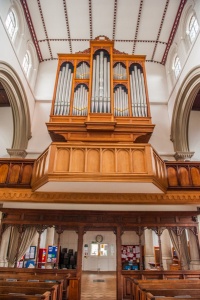 The west gallery and organ

St Paul's was built of local chert and Beer Stone. Fowler chose a neo-Norman style for the new church, with a striking tower stretching 104 feet high. The tower is a very conspicuous landmark in the Otter Valley and is visible for a long distance. It really draws your eye like a beacon. In the tower is a clock designed by a local resident named Matthew Murch in 1851.

The church was opened in 1838, and cost a total of £7600. Unfortunately, it needed extensive repairs just 11 years later, and these cost an additional £1000.

One of the earliest furnishings was a large painting of the Entombment of Christ, painted by William Salter, who gave his work to the church in 1838. It was originally hung above the high altar but now hangs in the narthex. In the south aisle is a wonderfully carved reredos given by the Mules family in the 1870s. It originally stood behind the high altar. Also in the south aisle is the font, a beautifully carved example of neo-Norman work.

The interior is a lovely example of 19th-century Romanesque style, hearkening back to the imagined glories of the Norman period. The nave is laid out in seven bays, leading to a rounded apse, and light is admitted through round-headed windows in the aisles and clerestory. The entire nave is ringed by galleries.

St Paul's is listed Grade II for its architectural and historic importance. Though it isn't architecturally outstanding it is certainly a very attractive town church and a very good example of early Victorian Romanesque style. 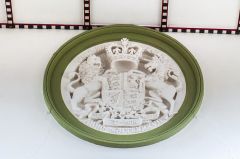 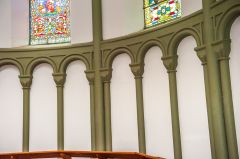 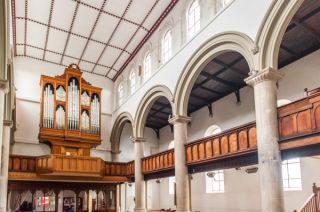