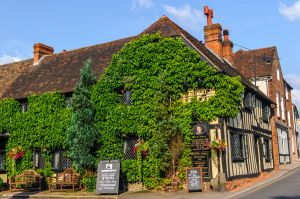 The village of Cobham lies just south of the old Roman road known as Watling Street. It was mentioned by Charles Dickens in The Pickwick Papers. The Leather Bottle Inn has a collection of Dickensian memorabilia and the church has a notable collection of medieval brasses.

On the High Street is Owletts, a red brick 17th-century house that was the home of architect Sir Herbert Baker. The National Trust has preserved the house as it was during Baker's residence.

Built in the 17th century, Cobham Hall is a superb mansion, traditionally the home of the Earls of Darnley. The Hall has operated as a public school for girls since 1957 but is regularly open to visitors. The gardens surrounding the house were laid out as a landscaped parkland by gardening pioneer Humphry Repton.

The parkland merges with Cobham Wood, with long avenues through carefully arranged plantations. At the end of one of these avenues is a mausoleum designed by James Wyatt for the 4th Earl of Darnley.

Traditionally the Earls of Darnley were buried at Westminster Abbey, but when the 3rd Earl died in 1781 there were no more spaces available at the Abbey. Wyatt was called in to design a family mausoleum for the Earl and his descendants.

The result of Wyatt's work and subsequent remodelling by George Dance the Younger is one of the most peculiar and enigmatic buildings in England, an Egyptian/Greek/Roman temple under a pyramidal roof. The mausoleum was never consecrated and thus remains empty.

Begun in the 13th century by the de Cobham lords of the manor, the church is famed for its collection of remarkably intact medieval brasses. There are 15 brasses forming a pavement in the chancel, and the effect is extraordinary when you see just how complete and exceptionally detailed the brasses are. Also in the chancel is the ornate tomb of George Brook, Lord Cobham, and his wife Anne Bray.

This exceptional work of art is carved from alabaster and dates to 1561. The base of the tomb is ringed with figures the couple's children, including William, Lord Cobham, who founded the almshouses behind the church. St Mary's is usually open daylight hours and is well worth a visit.

Just behind the church is Cobham College, or New College as it is sometimes called. The College was founded by Sir John de Cobham in 1362, as a chantry; a home for 5 priests who prayed for the soul of the founder and his family, plus Edward III and Queen Phillipa for good measure. The chantry college was dissolved in 1537 by Henry VIII, and the college buildings were abandoned. 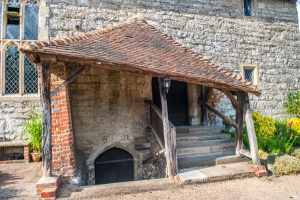 Then in 1597 Sir William de Cobham, the 10th Lord Cobham, left money in his will for the ruined College to be rebuilt as almshouses to provide relief to the poor of the village. The new foundation was to be known as 'The New College of Cobham' to distinguish it from the old 14th-century chantry college. A processional gateway was built between the college and church so that residents could walk to services under cover.

The College is today a residence for the elderly, and a very desirable one at that, with flats arranged around a central courtyard. The entrance is frequently open - it was open when we visited - and you can wander through the courtyard and see the amazingly skewed 16th-century porch from the outside. The interior is open occasionally for special events and heritage days.

Built of red brick, this 17th-century yeoman's house features amazingly ornate plasterwork ceilings, probably made by itinerant Italian craftsmen. Owletts was the birthplace of Victorian architect Sir Herbert Baker and is filled with Baker family mementoes and furnishings. In the gardens - designed by Gertrude Jekyll - is a birdbath made from Corinthian capitals salvaged from the Bank of England building in London.

Now with all these historic places to visit in Cobham, you'll need a place to stop and put your feet up for a rest and maybe indulge in a cold pint. Cobham's local pub qualifies as a historic site, too; The Leather Bottle is a picturesque, ivy-clad, timber-framed inn opposite the church.

Charles Dickens frequented the inn on his regular walks to Cobham from his home at Gads Hill. He was given to testing his latest story ideas by giving public readings of his efforts at the Leather Bottle. Dickens later used the village as a setting for The Pickwick Papers.

We loved visiting Cobham; the village is busy, yet full of so many attractive historic houses. The inn is a delight, and the church with its superb memorials is sheer heaven for a church-explorer like me. Owlett's is well worth a visit; the plasterwork ceilings alone are worth a special visit, and the Mausoleum is unlike any other historic building in England.

Note
Don't confuse this Cobham with the village of the same name in Surrey! 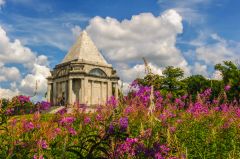 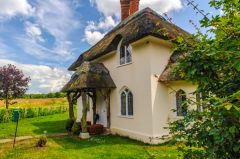 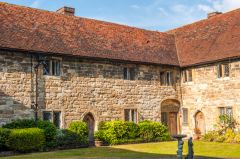 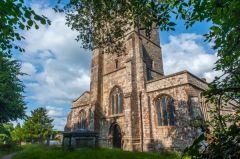 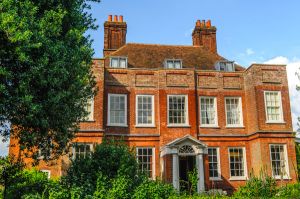 More self catering near Cobham >>

More bed and breakfasts near Cobham >>