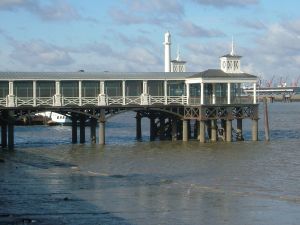 Gravesend is a large town on the bank of the River Thames. It was at Gravesend that the native American princess Pocahontas died on her way back to America in 1617. She was buried at the parish church of St George in Gravesend. The exact location of her grave is unknown, but a statue of her stands in the churchyard.

This attractive Georgian church stands at the foot of High Street. The origins of the church go back to 1478 when Edward IV granted a license for a chapel of ease for St Mary's at Heacham. St Mary's burned down in 1508 and was rebuilt, becoming the parish church in 1544. The 15th-century building burned down again in 1727 and a completely new church in Georgian style was erected in 1731 as part of the 'Commission for Building Fifty New Churches' scheme.

The town was mentioned in the Domesday Book of 1086 when it was in the hands of Bishop Odo of Bayeux, half-brother of William the Conqueror. The town grew up near the route of the old Roman road of Watling Street, linking London to the coast of southeastern Kent.

Gravesend was granted a market charter in 1268, and the market is still held today, which must make it one of the oldest in England. The town was incorporated in the same year, when the first mayor was elected, though curiously Gravesend did not gain a town hall until 1573. The Elizabethan town hall, much altered, survives as the Magistrates Court and as a venue for both public and private events.

Almost as important as the grant of a town charter was the Royal Charter of 1401 which allowed townsfolk to operate ferries to and from London. The ferry service became known as the Long Ferry and was extremely popular as it avoided the perils of travel by road.

The Gravesend Local History Society manages a museum in the remains of the 17th century New Tavern Fort on the riverside. The fort was remodelled by Major-General Charles Gordon (Gordon of Khartoum) from 1865.

Gravesend boasts not one but two historic piers. The oldest is Town Pier, built in 1834 and the oldest example of a cast-iron pier anywhere in the world. A restaurant and bar occupy the pier. The Royal Terrace Pier was erected just a decade later, in 1844. The 'Royal' part of the name was added after Princess Alexandra of Denmark landed at Gravesend on her voyage to marry Prince Edward (later Edward VII) in 1865.

Perhaps the most iconic building in Gravesend is the Clock Tower on Harmer Street. The tower was begun in 1887 to mark the golden anniversary of Queen Victoria's coronation. The cost was an estimated 700 pounds, which was raised by public subscription. The design emulates the Clock Tower of the Palace of Westminster in London.

The oldest building in Gravesend is the Milton Chantry, a chapel built by the powerful nobleman Aymer de Valence in 1322. After the Dissolution of the Monasteries put an end to chantries the chapel was sold by the crown and became a house, a tavern, and then a barracks for soldiers. It is now a heritage centre with displays on the history of Gravesend. The highlight of a visit is the superb 14th-century timber roof.

More self catering near Gravesend >>

More bed and breakfasts near Gravesend >>