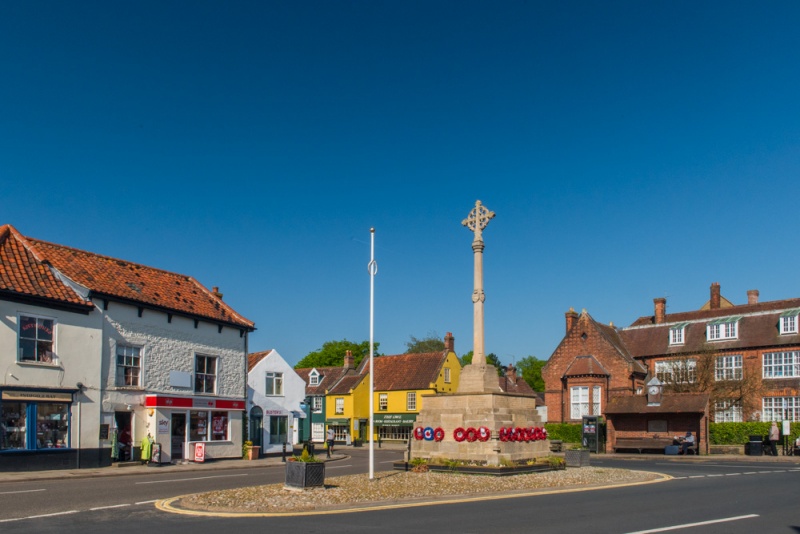 Market Place and the war memorial in Holt

Holt is a rural Norfolk town with a large number of attractive 18th-century buildings. The Georgian style of much of Holt is a result of a devastating fire that swept the town in 1708 and destroyed most of Holt's older buildings. As a result, the historic core of Holt has a preponderance of lovely Georgian buildings. 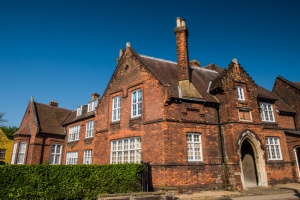 The fire started in Shirehall Plain and spread so quickly that butchers in the market did not even have time to rescue the meat from their stalls.

The cost of rebuilding the town was £11,258, aided by a royal writ. One of the major benefactors was Prime Minister Robert Walpole, who gave 50 pounds and a silver plate.

Holt dates to at least the Roman period, and Peacock Lane follows the route of a Roman Road to Salthouse. The town is mentioned in the Domesday Book of 1086. It developed as an important trading centre for north Norfolk, and for centuries its name was Holt Market.

In Holt are the original buildings of Gresham's School, founded in 1555 by Sir John Gresham, who went on to become Lord Mayor of London. Gresham converted Holt's medieval manor house into a free grammar school.

He was prompted by Henry VIII's suppression of the monasteries, which had the effect of closing church-run schools. The nearest local school was run by the monks of St Mary's Priory at Beeston Regis, but when the priory was dissolved there were no alternatives for local children.

Gresham had close links to the Fishmongers guild in London, and on his death, he bequeathed the school in Holt to the Worshipful Company of Fishmongers. The school managed to survive the devastating fire of 1708. The school was refounded in the early 20th century and moved to a new site outside the town, and the original 16th-century buildings off the Market Place now house the Pre-Prep School.

The North Norfolk Railway starts (or finishes, depending on your direction!) in Holt. The rail line uses both steam and diesel engines to pull trains to the coast at Sheringham, passing through magnificent countryside, with views to the coast and Weybourne windmill. It is popularly known as 'The Poppy Line' and the route once formed part of the Midland & Great Northern Joint Railway.

St Andrew's church is one of the finest historic buildings in Norfolk. The original church dates to the late Saxon period. Much of what we see today dates to the 14th century. Like the rest of Holt, the church was badly damaged in the 1708 fire. The thatched chancel burned down, and it took two royal writs to help rebuild the church. The church was rebuilt again in 1862 by the prominent Victorian architect William Butterfield.

Just outside the town is Holt Country Park, with over 100 acres of attractive woodland and heath, replete with nature trails. The woodland is dominated by Scots pines and broadleaf trees. Look for wild orchids in summer and lush displays of snowdrops in winter.

An early 19th century working watermill stands beside the River Glaven at nearby Leatheringsett.

You can explore historic Holt by following the 'Holt Owl Trail', a series of 24 numbered bronze plaques in the pavement that link some of the lesser-known historical treasures of Holt. The trail can be joined at any point and there is a free 32-page guide available at local shops. 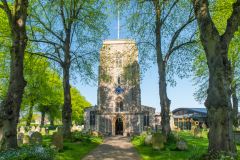 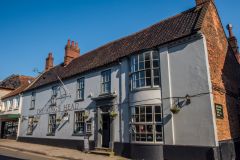 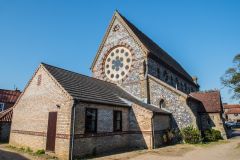 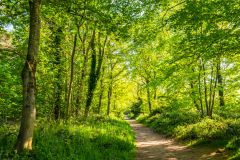 More self catering near Holt >>

More bed and breakfasts near Holt >> 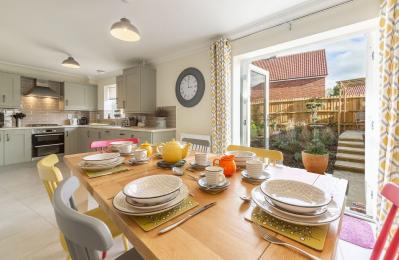 Built in 2018, this spacious and sophisticated modern mews style house is situated on a select development on the edge of Holt town centre. Beautifully presented, with stylish interiors, this …
Sleeps 6 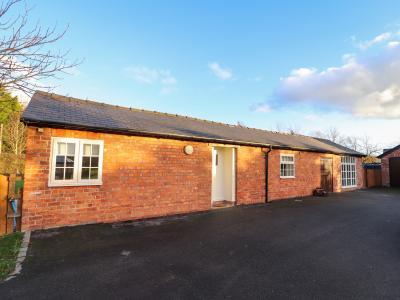 An all ground floor, detached cottage situated near the village of Holt, it houses two bedrooms and can sleep up to four people.
Sleeps 4