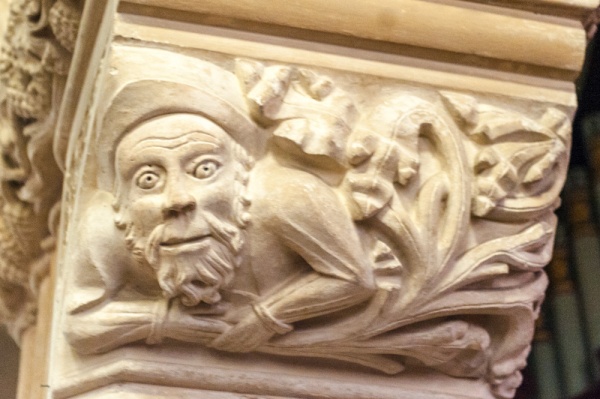 The large medieval church of St Mary Magdalene dominates the market town of South Molton, and its tower is easily visible anywhere near the town. The building we see today is the third on the site. Very little is known of the earliest church, but it must have been built in the late Saxon or early Norman period, for there is a church and four priests recorded in the Domesday Book of 1086.

It was rebuilt around 1150, but that second church was itself completely rebuilt in the 15th century to give us the attractive Perpendicular Gothic building we see today. The medieval building was restored in the 19th century. The oldest parts of the building are the side walls of the chancel, which are about 800 years old.

The aisles were widened in 1826 to accommodate the growing population of South Molton. In 1865 architect Charles Giles raised the roof and inserted clerestory windows, flooding the interior with light. Most of the colourful stained glass is from the Victorian period.

Records show that a chantry chapel stood on the south side of the graveyard as early as 1449. There was originally a spire atop the tower, but in 1751 the spire was struck by lightning, melting some of the roof lead. The spire was replaced with ironwork covered with lead. 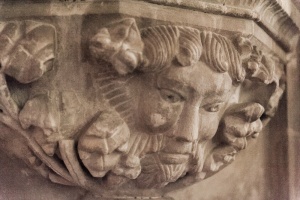 Another of the 12 Green Men

Look for a gate in the north wall of the churchyard. The unremarkable gate is a reminder of one of the most dramatic episodes in the history of South Molton. In 1655 a Royalist rebellion against Oliver Cromwell's rule broke out in the West Country.

A group of 300-400 rebels were trapped by Cromwell's troops in South Molton and defeated in a fight lasting 3 hours. A Royalist leader named Sir Joseph Wagstaffe escaped from his pursuers by jumping his horse over the churchyard wall. The gate was added after the episode, and even today is known as Wagstaffe's Gate.

The Victorian restoration thankfully preserved the medieval font and beautifully carved stone pulpit, both 15th century. The pulpit is a gem, richly carved with figures of saints. To the left of the chancel arch is a peculiar Green Man carving. The Green Man is an ancient symbol thought to represent fertility, later adapted by the Christian church.

Most Green Men are depicted with vines or foliage issuing from their mouths, but in this case, the Green Man has foliage flowing from his fingertips. The figure is thought by some historians to represent the master mason responsible for the 15th-century church.

There are 11 more Green Men scattered throughout the church, though the others are more traditional, showing foliage flowing from the figure's mouth. 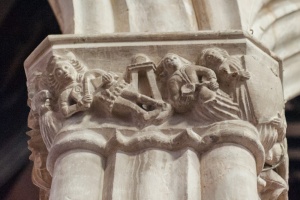 There are more beautifully carved figures on three column capitals in the nave. The scenes are fascinating, offering an insight into medieval life. One scene shows a woman carrying a pitcher, another depicts a woman with 3 giants, while a third shows figures dancing.

There are several interesting memorials, ranging from a simple stone oval mural monument to George Lucy (d. 1727), to an ornately gilded and painted memorial from 1692, too worn for the name of the deceased to be read.

The most interesting memorial to my eyes is a lovely wall monument to Edward Broad, 1684, with symbols of mortality flanking an oval carving supported by 4 angels. The symbols include a skull, an hourglass, gravedigger tools, and a coffin.

Rising above the pews nearest the organ are iron standards used to hold the maces of the corporation of South Molton during civic ceremonies.

The church is easily accessed off Broad Street (The Square) or North Street. Usually open to visitors daily. I loved visiting the church, especially the fascinating Green Men figures. 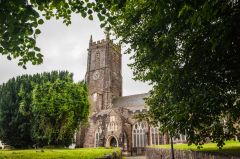 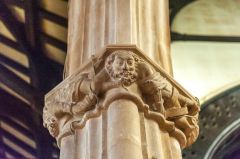 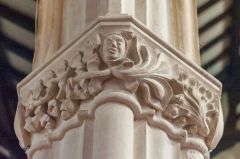 More self catering near South Molton

Self Catering near South Molton