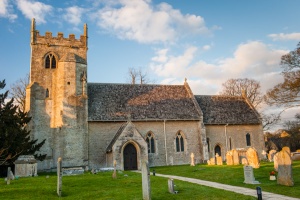 The pretty parish church of St Stephen in Clanfield probably dates to the late 12th century, probably the period 1180-1190. It was originally a chapel of nearby Bampton church and was dedicated to St John the Baptist, but sometime in the late 15th century the dedication was changed to St Stephen the Martyr.

Bampton claimed the status of a mother church with burial rights for Clanfield until 1506, but Clanfield had its own vicar by 1276. The advowson (the right to name the vicar) was held by Elstow Abbey from the early 13th century until the Reformation.

The church was rebuilt around 1320, with a striking west tower added in the 14th century. It is possible that the current chancel formed the original nave. 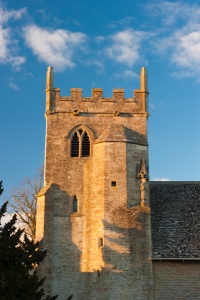 It is the tower that first draws your gaze as you walk up the path to the south door. First, it has an external stair turret, which, though certainly not uncommon, is sufficiently unusual in this area to draw your gaze.

The second feature is a very eye-catching large figure carved in an angle niche in the south-east corner of the tower. This is Stephen, to whom the church is dedicated, and he carries his emblems, a pile of stones and what looks like a book, though to be honest, the second emblem is rather worn and more difficult to make out.

This wide-eyed saint with what must surely be a fashionable 14th-century haircut stands under a canopy decorated with trefoil tracery.

The Journal of the British Architecture Association calls the south door crudely done and unfinished. I'd have to go along with that description. It looks as if the stone masons had plans for a large tympanum, but if so, those plans were never executed, and the result is a bit odd looking but not unattractive.

Inside the church, the main historic interest is a series of 17th-century brass memorial plaques set on the north wall of the chancel.

There is an octagonal font on a pedestal, each face carved with Perpendicular style tracery. The nave pillars are rounded, with scalloped capitals. The pulpit is stone, from the Victorian period, but there is a plain three-tiered sedilia set below the south window of the chancel that dates to the early 15th century. The font is also 15th century, with quatrefoil panels on each face.

St Stephens is a simple country church, set in a lovely rural village. 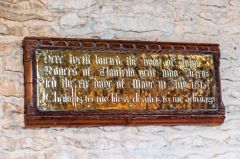 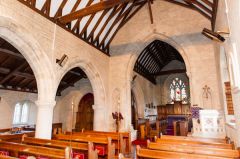 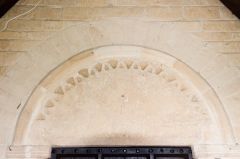 More self catering near Clanfield

More bed and breakfasts near Clanfield

Self Catering near Clanfield