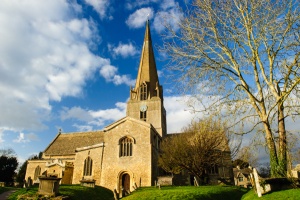 St Mary the Virgin church lies at the centre of what was traditionally the largest parish in Oxfordshire. There was a late Saxon church at Bampton, possibly a minster church. We know that it was a very important church locally, as there was a shrine here to St Beornwald from around 950 AD to the Reformation when such shrines were destroyed.

Beornwald may have been the founder of the minster here, and a gabled recess in the north transept may be a reminder of his shrine. The only surviving part of the Saxon building is the lower section of the west tower, where traditional Saxon herringbone stonework can be seen.

The earliest written record comes in 1069 when William the Conqueror granted the church here to Leofric, Bishop of Exeter. A photograph of the original deed, along with an English translation of the Latin text, is on display inside the church.

That early church was almost completely rebuilt in the late 12th century. One possible reason that it needed rebuilding is a fascinating written reference that from 1141-42 the tower was fortified and used as a castle. 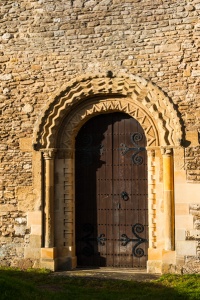 This is not as far-fetched as it might sound, for that date falls within the period of the Civil War between Queen Matilda (Maud) and King Stephen. There was military action in this region - we know that Oxford Castle was besieged - so it is certainly possible that the church was used as a temporary military fortress and was damaged in action.

Our source for this event is the Gesta Stephani ('Deeds of Stephen'), a 12th-century account of King Stephen's reign by an anonymous monk.

As you approach the church the very first thing that draws your eye is a wonderfully carved Norman doorway set in the wall of the south transept. This is carved in two orders of chevron and zig-zag patterns, and a pair of worn Green Men are carved on the jamb capitals.

Almost directly opposite the entrance door, in a niche against the north wall, is a large statue of St John the Baptist. This carving dates from about 1270 and was originally decorating the tower. It fell from the tower during a storm in 1990 and was moved inside the church to preserve it. 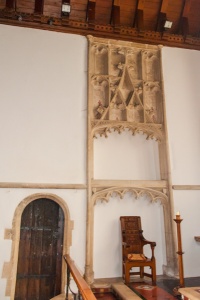 One of the most intriguing interior features can be found in the chancel, set against the north wall. This is a slender 'tower' of stonework in three sections, stretching from floor to ceiling, with a canopy over blank niches in the bottom two sections and an ornate design in the shape of a steeple in the upper section. The official church guide calls it a canopied recess, but it is elsewhere described as an Easter Sepulchre. If it is a Sepulchre - few of which have survived intact in parish churches - it is one of the most striking and beautifully ornate examples I have yet seen. The most likely date is 15th century.

Even older is a stone reredos, set behind the altar. This is a very nicely carved example of 14th-century work, with a row of 12 apostles flanking a figure of Christ, each within a canopied niche. The reredos appears to have been cut from a single block of stone. To the south of the altar is a three-seat 13th-century sedilia. Wonderfully carved heads decorate the space above each column of the sedilia arches. 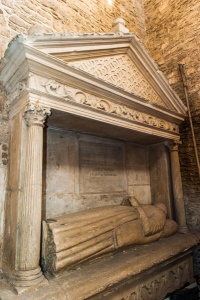 In the chancel floor, set within diamonds of contrasting coloured floor tiles, are three medieval brasses. Two are priests, the oldest being Thomas Plymmyswode, vicar of Bampton in 1401. The other priest is Robert Holcot (d. 1500), while the third figure is a female, thought to be Frances Horde (d. 1633), wife of Sir Thomas Horde of Cote House.

The Hordes built a small family chapel opening out of the south transept. In that transept, you will find a very nice memorial to George Thompson (d. 1603), set beneath a classical pediment supported on Corinthian pillars. On the floor beside the Thompson memorial is a much worn recumbent effigy of a woman.

Other items of note include the square stone font, and the exterior west door to the tower, which is well-preserved, protected under the tower arch.

Bampton's ancient church is an absolute delight to visit; one of the most enjoyable and historically interesting in Oxfordshire, and well deserves a visit. I loved it! 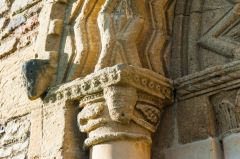 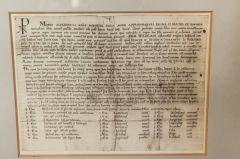 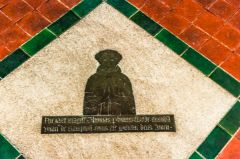 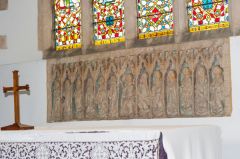 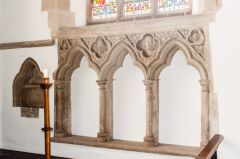 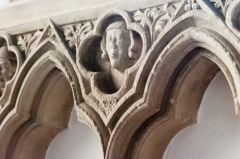 More self catering near Bampton

More bed and breakfasts near Bampton

Self Catering near Bampton