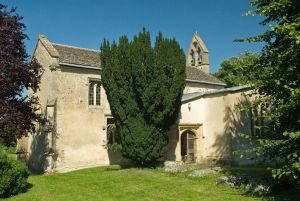 St George's is primarily a destination for visitors interested in seeing the grave of Arts and Crafts pioneer William Morris. Morris and his wife Jane are buried beneath a simple gabled memorial in the churchyard, a short stroll from Kelmscott Manor, their home for over a quarter of a century from 1871.

There is much more to this quiet country church, however. The church dates to the late 12th century, and it has been largely unaltered since the middle of the 16th century.

The church consists of a nave, chancel, north aisle, north and south transepts, and a south porch. There is no tower, rather, there is a small bellcote over the east end of the nave. The bellcote houses one of Kelmscott's treasures. There are two bells, the northernmost of which dates to the early 13th century, making it one of the earliest bells in England.

The porch is Tudor, but the round-headed entry door is late 12th century. On the right side of the door jamb are three fascinating carvings, possibly mason's marks.

The nave and north aisle are separated by four thick, rounded columns. On the underside of the arches can be seen traces of scrollwork painting in red ochre. These are contemporary to the wall painting in the north chapel, about which more in a moment. At the west end of the nave is an unadorned tub font, probably late 12th century.

The chancel is largely 13th century, with carved corbels. The east window contains a remnant of 14th century stained glass depicting St George slaying the dragon. Nearby is a 12th-century piscina. The altar frontal is 17th-century Turkish fabric donated by Jane Morris, wife of William Morris of Kelmscott Manor.

The south chapel was built around 1320, though the roof was heightened in Tudor times. Carved corbel heads remain from that remodelling.

The most fascinating feature of St George's church waits in the north chapel, for here the walls are covered in several large wall paintings, dating from about 1280. These paintings are executed in red ochre and depict scenes from the Old and New Testaments, including Cain and Abel, Massacre of the Innocents, Adam and Eve, the Last Judgement, and the Presentation in the Temple. Note particularly the Cain and Abel paintings. Here, Cain is shown with his hair sweeping up into points, as if to signify devil's horns.

These Biblical designs are set beneath painted arches separated by spandrels. Further paintings of crowned heads adorn the spandrels.

The preservation of the church owes much to William Morris. Morris was critical of the often over-zealous restoration practised by his contemporaries and founded the Society for the Preservation of Ancient Buildings to publicise his concerns. It is not clear if he took a personal hand in the careful and understated repairs carried out here in the late Victorian period, but his influence was certainly felt.

If you come to Kelmscott to visit the manor, it is well worth a short stroll to visit this delightful ancient church and see the wall paintings.