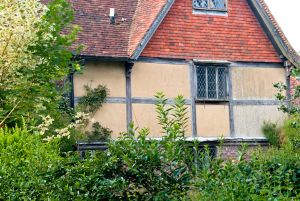 A lovely Wealden village near Tenterden, with a long, broad village green where cricket is played in the summer. There are two excellent pubs, the Bull Inn and the Duke of Wellington, located near the large village green, which is lined with attractive half-timbered houses. At the top of the green is the parish church of St George.

On the outskirts of Benenden lies Benenden girls school, begun in 1924, using the buildings of Hemsted House, a historic house built by the first Lord Cranbrook in 1857, on the foundations of a much, much older house.

Following the Norman Conquest, the manor of Benenden was given by William the Conqueror to his half-brother Odo, Bishop of Bayeux. The village was mentioned in the Domesday Book of 1086, by which time it had already acquired a parish church, one of only four villages in the Weald important enough to do so.

The manor was granted to the Guldeford family by Richard II, and later visited by Elizabeth I. Hemsted House was sold in 1716 to Sir John Norris, Admiral of the Fleet. North's grandson, also named John, married an infamous courtesan named Kitty Fisher in 1766. Fisher, whose real name was Catherine Marie Fischer, is remembered in the children's rhyme:

Fisher was extremely popular among the villagers of Benenden, and had a reputation for generosity to the poor; unfortunately, she died only four months after her marriage, either from smallpox or, perhaps, from the effects of using lead-based cosmetics. She was buried in the Norris family vault in Benenden church. The graves of later Lords Cranbrook can be seen in the churchyard.

Two Roman roads lead through the parish, and there is evidence of Iron Age settlements. There are over 20 Wealden hall houses in the village dating from 1470-1500, suggesting that Benenden was a very prosperous place in the Middle Ages. Much of this prosperity was based upon cloth making, and many people were involved in the creation of cloth, from weaving, dyeing, fulling, and sheering.

St George's church originally had a large detached steeple, but this was struck by lightning in 1672.

There are several historic almshouses in the village, including an 18th-century house in The Street. Nearby is Queen's Well, built to commemorate the Golden Jubilee of Queen Victoria in 1887. Across from the well is St George's Club, built in 1881 by George Devey for Lord Cranbrook.

There are several interesting historic buildings fronting onto the Green, including 17th-century Clevelands, the Edmond Gibbon School (1609). At one corner is the Bull Inn, a picturesque pub dating to circa 1608.

The village sign at the bottom of the green says a lot about this lovely village; it shows a man in a top hat playing cricket on the green. Sure enough, when we visited, modern cricketers were enjoying themselves on the wicket in the centre of the green, just behind the village sign!

The church of St George stands at the top of the green. It is a largely 14th and 15th-century building, restored in the 18th and again in the 19th century. Within the church are memorials to the Norris and Gathorne-Hardy families.

More self catering near Benenden >>

More bed and breakfasts near Benenden >>