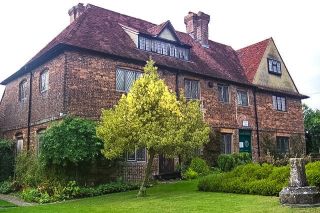 Cranbrook Museum
The Cranbrook Museum is a museum of local history for Cranbrook and area, housed in a historic 15th-century timber-framed farmhouse. Collections include Cranbrook Town, Rural Industry, Agricultural Tools Kitchen and Scullery displays, Military history, historic costumes, and much more. The museum is set in attractive gardens.

The picturesque museum building was built around 1480 as a home for the bailiff of Rectory Farm, which was owned by the Archbishop of Canterbury. The bailiff's home took the form of a traditional hall house. Original medieval features include moulded timber posts and a beam carved with the likeness of a dragon. The house was later rented out to tenants. One 16th-century tenant was Richard Taylor, a wealthy clothier.

Shortly after 1620, the medieval hall house was rebuilt. Two chimney stacks were inserted, each with an inglenook fireplace. The building was in use as a vicarage throughout the 17th century. One resident was Rev Charles Buck, the vicar of Cranbrook. In 1683 Rev Buck added brick facing on the north and west sides of the house The date is inscribed in the exterior plasterwork.

In the Victorian period, the house was divided into four separate cottages. In the 20th century, the house was acquired by the Cranbrook Rural District Council, and in 1971 the Council made one of the cottages available to the Cranbrook Museum & Local History Society to act as its museum. Over the following 24 years, the museum expanded into the other cottages as tenants left until in 1995 the whole building was restored and given over to full-time use as a museum.

The Cranbrook Colony was a group of artists who began to settle in the Cranbrook area around 1854. The Colony focussed on painting scenes of everyday life, with themes of family, childhood, religion, working life, ageing and death. The first artist to make his home in Cranbrook was Frederick Hardy who settled in a house on High Street.

He was joined in 1857 by Thomas Webster, who acted as Hardy's mentor. They set up their studio in Hardy's house, and he lived in the basement. The pair were quickly joined by fellow artists George Hardy (Frederick's brother) John Horsely, and George O'Neill (who was married to Horsely's cousin). The artists were very active in community life and gave generously to local causes. A memorial to Thomas Webster stands in Cranbrook's parish church.

Researchers of family history will enjoy the extensive collection of local archives. The artwork on display includes several paintings by William Jones Chapman (1808-1870).

The Museum is managed by the Cranbrook Museum & Local History Society, which publishes a number of fascinating books relating to Cranbrook local history as well as an annual journal.

More self catering near Cranbrook Museum >>