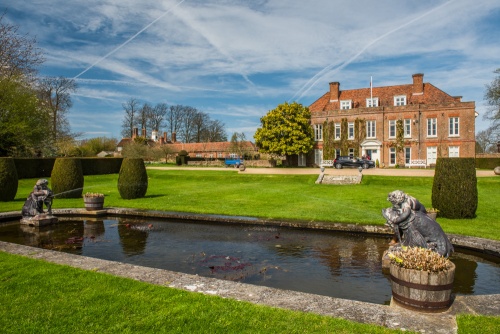 An attractive mix of formal and informal gardens, Hole Park features formal gardens near the house with clipped yew hedges outlining a series of garden rooms. There is much of interest, including a wrought iron gatesail, a fountain, egg pond, and a walled rose garden. The woodland gardens offer a wonderful display of bluebells in spring.

Begun in the 1920s and still owned by the same family, Hole Park is a treasure for gardeners. The gardens were designed by Colonel Barham between the two wars, set below a historic manor house which is still a family home and thus not open to visitors.

The 15 acres of privately owned garden and woodland offer a sensory delight, with colours from Spring through Autumn. The gardens are set in over 200 acres of parkland, on the borders of Kent and East Sussex. 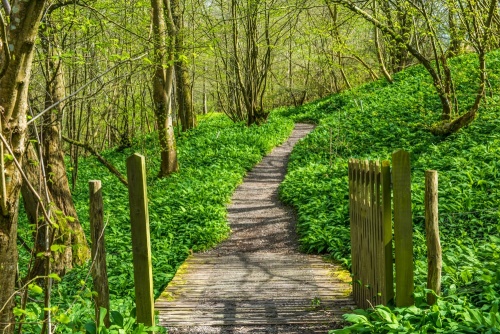 Hole Park and bluebells are almost synonymous; in fact, the woodlands at Hole Park may be the best place in England to see spring displays of bluebells. The best time to see the woods in full colour depends on how the bluebells respond to winter temperatures, so it's a good idea to check the garden's website for their 'Bluebell Barometer', suggesting the best times. Normally that is between late April and early May.

A circular bluebell walk meanders through the woodland, with convenient seats for soaking up the sights and smells as carpets of bluebells mix with wild garlic.

Closer to the house are more formal garden areas, with clipped yew hedges and topiary complimenting an Italian style and walled gardens. There are attractive water features and gravel paths to take visitors across wide lawns to a rose garden.

The garden is bounded by wrought-iron gates, and statues are carefully placed to provide interesting points of view. 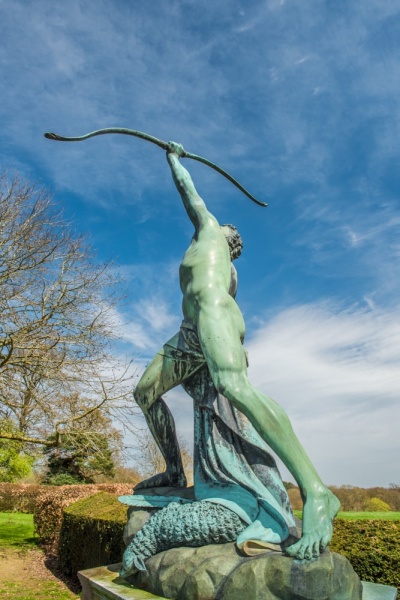 One of the most eye-catching features at Hole Park is a striking bronze statue known as The Eagle Slayer. The statue was sculpted by the popular Victorian artist John Bell and exhibited at the Great Exhibition in London in 1851.

The sculpture shows a shepherd boy firing an arrow at an eagle that has kiled a lamb in his care. The dead lamb lies huddled at the shepherd's feet. The sculpture represented a huge artistic breakthrough; it was one of the first large bronze statues to be hollow cast.

A blue border contrasts with hot colours in a tropical border, while a vineyard and semi-circular garden add interest. Less formal areas include a bog garden and a gently meandering stream through woodland dells, where masses of azaleas and rhododendrons add vibrant colour in the early summer, with wisteria and herbaceous borders to follow.

Near the house is a formal Millennium Garden, centred on a pool where Great Crested Newts reside. The garden features a herbaceous border planted in warm colours. Look for the Sundial Garden, featuring an 18th-century sundial as its focal point. The sundial stands on a mosaic in the shape of a bear, the symbol of the Barham family.

Near the Sundial Garden is a walled garden, entered through ornate memorial gates erected in memory of Captain Wilfrid Barham, who died at Ypres in 1915, aged just 21. On top of the gate is the badge of The Buffs, Captain Barham's regiment.

Outside the walled hgarden is The Policy, a wide meadow rich in wildflowers, daffodils, and flowering shrubs, supplemented by colourful azaleas and rhododendrons. In the parkland is a circle of Scots pine, one for each decade of the century that the family have resided at Hole Park.

In the woodlands below the house is a historic ice house, built around 1740. Ice from nearby ponds, such as Egg Pond on the hill above, was stored here, and layered with straw for insulation and to make removal easier. Properly packed ice could last up to a year, and could be taken as needed to the house for cooling drinks or making confections. The Grade II listed ice house remained in use until the middle of the 19th century when commercial ice delivery was available. It is lined with bricks, with a cavity between two brick 'skins' to provide greater insulation.

Hole Park is a hidden gem, and one of Kent's best-kept secrets. Now the secret is out! We had a lovely time exploring the gardens, and can highly recommed a visit, especially in spring when the bluebells are at their best. 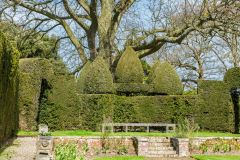 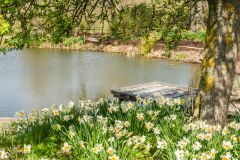 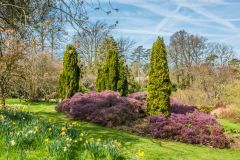 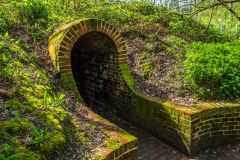 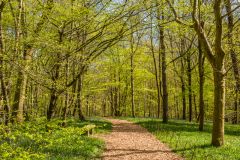 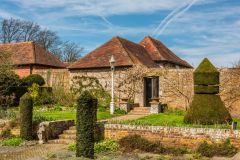 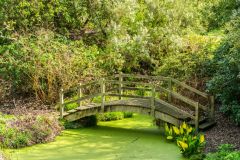 More self catering near Hole Park >>