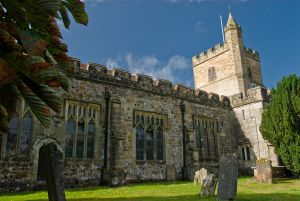 There was a church at Benenden at the time of the Domesday Book survey in 1086, making Benenden one of only four parishes in the Weald rich enough to have a church. That early building was enlarged in the 13th century when the current south porch was created.

Sometime around 1418, a huge detached bell tower was added. This was a remarkable structure of wood, on a stone foundation. The tower reached 132 feet in height, much higher than the current tower.

Also in the early 15th century, the north porch with its vaulting and carved gargoyles was added. The vaulting meets in a centrepiece representing a salamander; the symbol of eternal life in medieval Christian symbology. Each corner of the vaulting shafts terminates in a corbel head in the shape of peculiar faces or masks.

The bell tower was unfortunately struck by lightning in 1672. The tower was burned to the ground, and all five bells melted from the extreme heat. The tower was not replaced until 1718, with money earned from investing the proceeds of selling the scrap metal from the old bells. When the church was rebuilt, it was with a sturdy, integrated tower.

Benenden church was heavily rebuilt in 1861 by architect David Brandon, under the direction of Rt Hon. Gawthorne-Hardy, later first Earl of Cranbrook. Memorials to the Gawthorne-Hardy family can be seen in the chancel.

Also within the church is a memorial to Sir John Norris, Lord of the Admiralty, who owned the manor of Hemsted House. Norris's grandson, also named John, married Kitty Fisher, a famous courtesan who is remembered in a popular nursery rhyme. Fisher is buried in the Norris family vault under the chancel.

There is also a memorial brass to Edmund Gibbon, who founded the local school in 1609.

In the churchyard is the grave of an early cricketer by the name of Richard Mills, whose gravestone is carved with a cricket bat. 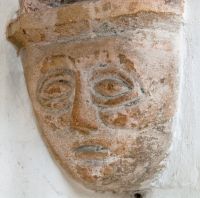