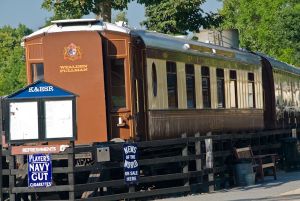 The Kent and East Sussex Railway is a historic light railway that runs for ten miles across the Kentish Weald, from the old market town of Tenterden to the historic 13th-century fortress of Bodiam Castle. For part of its route, the railway follows the course of the River Rother through attractive countryside.

There are stations at Tenterden, Northiam, and Bodiam, however there are no parking facilities at Bodiam Station, so visitors are advised to begin their journeys at either Northiam or Tenterden. The route also passes through Rolvenden and Wittersham Road Station on its way from Tenterden to Bodiam.

The Kent and East Sussex Railway opened in 1900 when it was known as the Rother Valley Railway. It was a light railway, intended to operate only until operating profits could be generated to rebuild it using more permanent heavy rail techniques.

In 1923 the railway introduced a unique carriage; a pair of Ford busses linked back to back and fitted with rail wheels. The railway could not compete with the convenience of road travel and finally ceased operation in 1954. A charitable society was formed with the aim of restoring the railway to passenger service, and regular service began again in 1974.

The railway uses a mix of steam and diesel locomotives, including two 'Terrier' steam locomotives built in 1872.

The K&ES railway also has special days out with 'guest' locomotives like Thomas the Tank Engine and his friends. 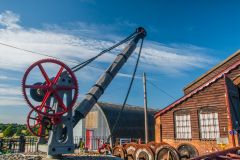 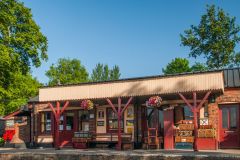 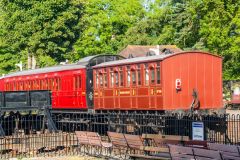 More self catering near Kent and East Sussex Railway >>

More bed and breakfasts near Kent and East Sussex Railway >>