HERITAGE HIGHLIGHTS:   The disc barrow is the largest in Hampshire 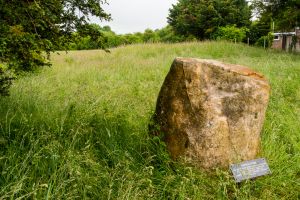 The sarsen stone at Flowerdown Barrows

Flowerdown consists of a trio of Bronze Age burial mounds and a sarsen stone. The mounds were originally part of a larger cemetery of barrows, of which little trace remains.

There are a pair of bowl barrows and a large disc barrow. The bowl barrows are distinctly different in size, the larger being 20 metres diameter and the smaller only 8 metres. The disc barrow is 30 metres across, with a circular platform topped by a pair of mounds. Nearby is a small sarsen stone, which was found in Dean Down Drove in 1906. It was moved to the Hampshire County Museum in Chilcomb and relocated to the Flowerdown site in 1984.

Disc barrows, sometimes called fancy barrows, were used by the Beaker People of the Wessex area from approximately 1800 - 1750 BCE. They are a derivative of the earlier bell barrow design and are characterised by a broad, low shelf, or berm, surrounded by a ditch.

Though the barrows are easy to access once you know where they are, they aren't immediately obvious as you enter Littletown. There is no obvious sign that I could see, and no parking nearby. I parked on a residential street about five minutes walk from the junction of Kennel Road and Main Road, in the centre of Littletown. The barrows proved to be on the east side of Main Road just north of Kennel Road, beyond a small wooden gate.

There is an English Heritage information panel inside the field, which is rather crammed in between houses on three sides. Immediately beside the panel is the sarsen stone and in front of that is an obvious bowl barrow, looking like an upturned cereal bowl.

A short path leads past the barrow to the much more obvious disc barrow. This is really quite impressive, though the earthwork banks are low and very eroded. You can walk around the circumference of the disc barrow, on top of the banks, and you can make out the outlines of the two small burial mounds inside the earthwork circle. 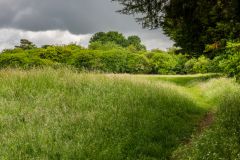 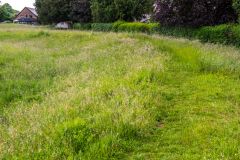 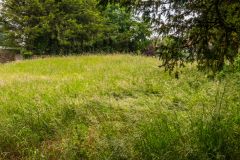 More self catering near Flowerdown Barrows >>