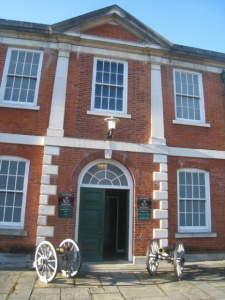 The Royal Green Jackets is a relatively new regiment, formed only in 1966, yet it has a history that goes back centuries. The Royal Green Jackets were formed from a union of the 43rd and 52nd (The Oxfordshire and Buckinghamshire Light Infantry), The Kings Royal Rifle Corps (60th Rifles) formed in 1755, and the Rifle Brigade (95th).

In 1989 Queen Elizabeth II, as Commanding Officer of the regiment, opened this museum at the upper end of the High Street in Winchester.

Here you will find displays outlining the proud history of the regiments that make up the modern Green Jackets, including historic artefacts, uniforms, and photographs. Some of the most memorable items on display include the writing case used by General Wolfe at Quebec and clothing worn by the Duke of Wellington.

There are nine scale models of famous battles on display, including one of Waterloo which contains no less than 22,000 pieces.