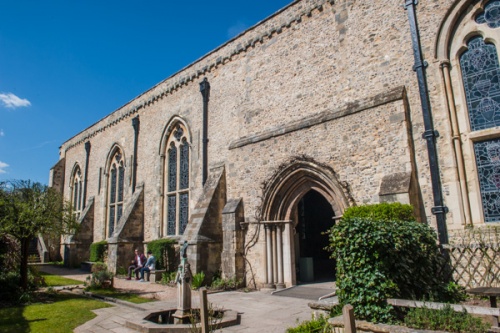 Tucked neatly in a narrow space behind the Great Hall of Winchester Castle is a quiet gem, Queen Eleanor's Gardens. This peaceful oasis is an accurate recreation of an early medieval garden, complete with many features that would have been present during the 13th century, and all the plants are known to have been grown in that period. 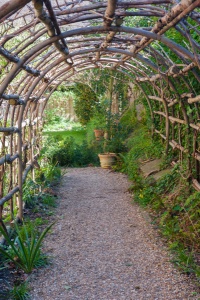 The inspiration for the garden comes from surviving records of royal gardens. Within the walled enclosure is a grassy bower, a tunnel arbour, fountain and pool, and a herber, or secluded sitting area.

The "Eleanor" in the name of this garden refers to not one Eleanor, but two; Queen Eleanor of Castile, wife of Edward I, and Queen Eleanor of Provence, wife of Henry III. Both women spent considerable time living at Winchester Castle, which at the time was a principal royal seat.

One interesting aspect of the garden that may not be readily apparent to modern visitors is its symbolic nature. During the medieval period, certain plants were philosophically associated with particular religious or personal virtues.

Among the plants present in this garden are holly, ivy, and bay, which represented the medieval ideal of faithfulness. The roses, columbine, and strawberry plants all represented various aspects of Christian spiritual philosophy. 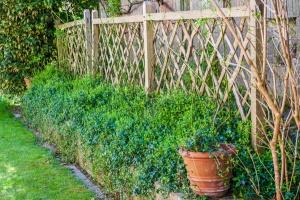 A shady area of the garden

Forming one side of the garden is the last remaining wall of King's House, built by Sir Christopher Wren for Charles II in 1683, the house was used as a military barracks throughout the Victorian period until it was destroyed by fire in 1894.

Though small, the garden has a delightful ambience, with a quite remarkable variety of features packed into a small space.

A modern observer will quickly notice that medieval people had a quite different idea of what a garden should look like. There are no massed flower beds, indeed, there is very little in the way of colour, at least by modern standards.

Rather, there are small, informal garden areas, intertwined with pathways, and sprinkled with herbs and aromatic plants. For more on medieval gardens, click here. 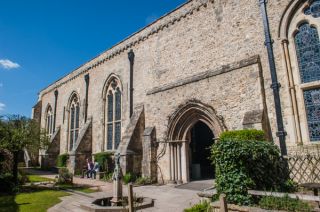