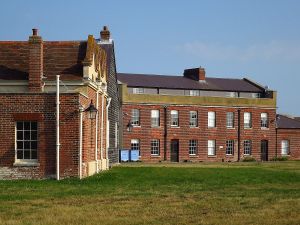 Fort Cumberland
Fort Cumberland guards the entrance to Langstone Harbour, to the east of Portsmouth. The fort was built in 1740 but completely rebuilt by the Duke of Richmond over 25 years, from 1782 to 1812.

The fort is a bastion type, in a pentagon shape, and may be the largest and most impressive example of 18th-century defensive building in England. It was built to create a profile as low as possible, yet still high enough for gun emplacements. The location was chosen to prevent invading forces from landing at Langstone and attacking the Royal Naval Dockyards at Portsmouth over land.

The earliest fortification was a small battery built in 1714 but the first fort was erected by the Duke of Cumberland (hence the name) in 1747. Cumberland's fort was built on a star-shaped plan, with earthen banks. Within the earthworks were brick buildings, including a powder magazine, guardhouse, storeroom, and one barrack block.

From 1782 the fort was enlarged and completely rebuilt in masonry. The original fort was destroyed, except for the storeroom and guardhouse which were both incorporated into the new building. The star plan was replaced with the present polygon, with five projecting bastions at the angles.

In 1858 the fort was transferred from the War Department to the Board of Admiralty. From 1859 it served as the headquarters of the Royal Marine Artillery (RMA). By that time the fort's armaments had become obsolete, and in 1860 new muzzle-loading Armstrong guns were installed.

Throughout the 20th century, Fort Cumberland remained an RMA base and a Marine training centre. During WWII the fort was hit by German bombs and 8 Royal Marines were killed. It was removed from service in 1964 and passed to English Heritage in 1975.

Fort Cumberland is now owned by Historic England (formerly English Heritage) and used as a regional administrative headquarters and base for the Centre for Archaeology. It is open only for pre-booked tours (see English Heritage website) and for Heritage Open days.

More self catering near Fort Cumberland >>