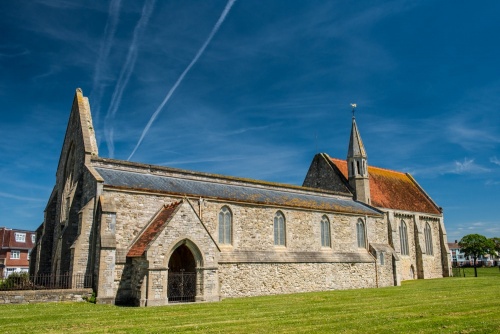 A 13th-century church constructed as part of a larger complex of hospital buildings. The Royal Garrison Church is sometimes known as the 'British Army Cathedral'.

In 1212 Peter de Rupibus (Peter des Roches), Bishop of Winchester, founded Domus Dei (God's House); a complex of buildings aimed at providing spiritual and physical comfort for pilgrims heading for Winchester, Canterbury, and Chichester. The hospital was dedicated jointly to St John the Baptist and St Nicholas, and followed the Augustinian rule. The hospital originally consisted of a long hall, with a chapel at one end.

Domus Dei was headed by a Warden, or Master, under whom were six Brethren and six Sisters, who provided nursing care and domestic duties to look after the pilgrims. The hospital received numerous grants and donations from nearby landowners, which caused some jealous discord with the parish church of St Thomas nearby.

In 1325 Joan de Bohun gave Domus Dei the manor of Broughton. In thanks, the brethren established a chantry in the south aisle, as a place to say masses for Joan and her relatives. 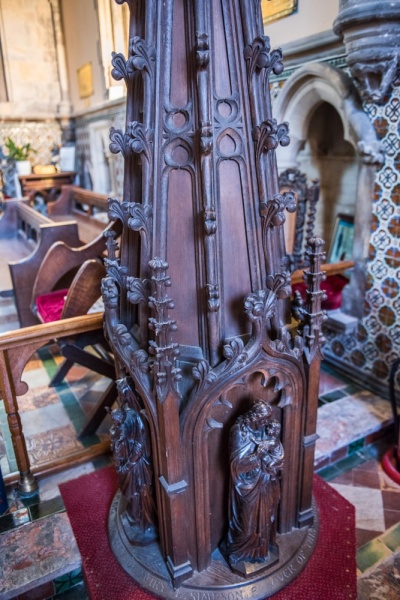 In 1449 Domus Dei was the scene of a grim murder. It seems that Adam Moleyns, Bishop of Chichester, was sent to Portsmouth to pay the servicemen of the royal garrison there. Moleyns decided to reduce the amount to be paid by one penny as a penalty for unseemly behaviour during mass. Bad decision! Moleyns was murdered in Domus Dei, possibly by sailors hired by the Duke of York.

In retribution for the murder, the citizens of Portsmouth were excommunicated by the Pope. The excommunication was in place for 60 years and was only removed after leading citizens underwent a ritual of penance which involved being beaten by rods. The city also had to agree to erect a cross and a chapel where prayers for the Bishop's soul should be said every Good Friday. 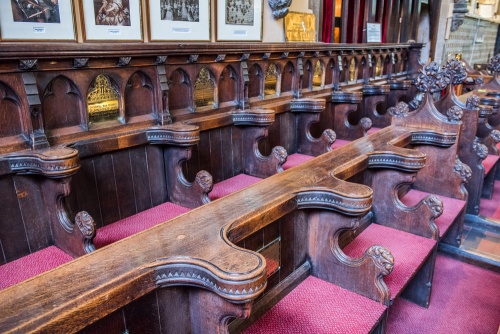 Beautifully carved seats in the chancel

The Government House welcomed several royal visitors over the centuries, including Charles II, who married Catherine of Braganza here in 1662. James II visited a decade later, and George III and Queen Charlotte visited on two occasions.

The nave of the Royal Garrison Church was badly damaged in bombing raids during World War II. It is now a roofless ruin, but the chancel remains intact.

The building is very simple in layout, and consists of a nave, chancel and vestry, with north and south aisles, primarily in Early English style. Some evidence of 13th to 15th-century architecture remains, but much of what remains is from a late Victorian restoration headed by architect by GE Street. The most imposing of the many memorials is that to Sir Charles Napier, commander-in-chief of the British army in India. His memorial stands outside the ruined entrance arch.

The chancel boasts a superb set of stained glass windows, most on military and naval themes. The oldest feature is an ornate wooden font cover. Though parts of the font cover are Victorian, much of it dates to the 14th or even the 13th century. One of the volunteer guides told us that the cover is so fragile that they don't dare dust it, instead they simply blow on the surface to remove as much dust as possible without actually touching the medieval wood.

The church is owned by English Heritage but maintained by the Friends of the Royal Garrison charity. 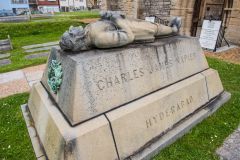 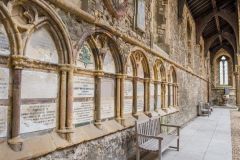 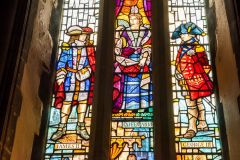 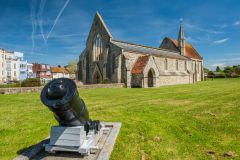