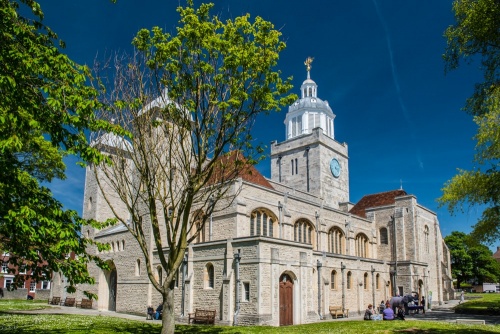 Portsmouth Cathedral is a 12th-century church that became elevated to cathedral status in the 20th century. The core of the building was completed in only 16 years, to a cruciform plan with a crossing tower. The style is transitional Gothic.

In 1180 Jean de Gisors granted land to the Augustinian canons of Southwick Priory to build a chapel dedicated to Thomas Becket, whose murder by 4 knights in Canterbury Cathedral just a decade before must have been fresh in Gisor's mind. The chapel served as a chantry, with priests to say mass for Gisors and his family, and became in time a parish church, expanded over time as Gisor's new town of Portsmouth grew in importance.

The church was built to a cruciform plan, with a central tower rising over the crossing. Aside from its ecclesiastical function as a bell tower, the chapel tower also served a practical purpose as a lighthouse and a lookout point for ships in the channel.

A devastating French raid on Portsmouth in 1337 spared St Thomas' Church, but worse was to follow. In 1449 a group of local sailors murdered the Bishop of Chichester. In retribution, the entire population of Portsmouth was excommunicated by the Pope. This meant that no services could legally be held in the town, so the church was forced to close. 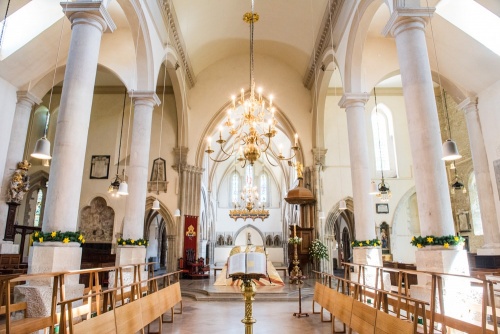 Thankfully, the closure was not permanent, and Elizabeth I worshipped in St Thomas' during a visit in 1591. During the Civil War, the Royalist garrison of Portsmouth used the church tower as a lookout point to watch troop movements of Parliamentary soldiers besieging the town.

Parliamentary gunners fired on this makeshift lookout post and caused huge damage to the nave and tower, though surprisingly no one in surrounding buildings was harmed. In the north ambulatory is a cannonball from Cromwell's guns, discovered in 1938 when foundations for the new nave were being dug.

When Charles II took the throne in 1660 one of his actions was to call upon churches across the country to contribute the 9000 pounds needed to restore St Thomas. The medieval nave and tower were rebuilt from 1683, replacing the medieval furnishings with neoclassical decoration. A mark of the growing congregation during these years is the early 18th century galleries, added in 1708 and enlarged in 1750.

In 1927 the Diocese of Portsmouth was formed, and St Thomas was raised to temporary cathedral status. Even then, it was not the first cathedral in Portsmouth, but the second, for the Catholic Cathedral of St John the Evangelist was built in 1882. 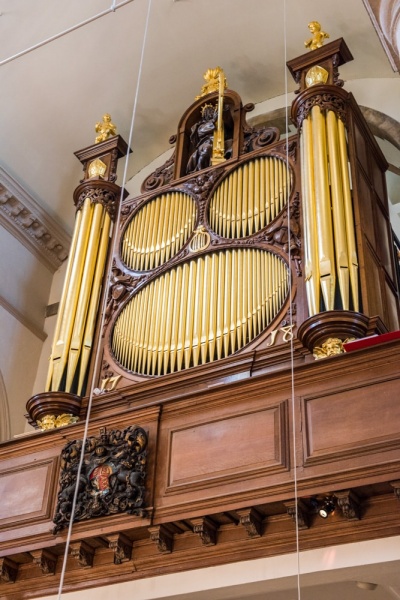 St Thomas became a full cathedral in 1932. The church was enlarged to a scale thought more appropriate to a cathedral, though the work ceased during WWII, and the ambitious plans had to be scaled back. The cathedral was finally consecrated in the presence of Her Majesty Queen Elizabeth, the Queen Mother in 1991.

Though many of the interior furnishings are comparatively recent, there are some very interesting historical features, including a pulpit dated to 1693. This is a cut-down version of the original, which had three decks. The organ case dates to 1718 and was crafted by Francis Bird, who decorated the exterior with carvings of King David surrounded by cherubs. The chancel and transepts remain from the 12th-century church.

One poignant memorial is a reminder of Portsmouth's greatest naval disaster, the sinking of the Mary Rose. In the Navy aisle is an inscribed stone marking the place where bones recovered from the wreck were interred, carved with the words 'May they rest in peace 19 July 1984'. 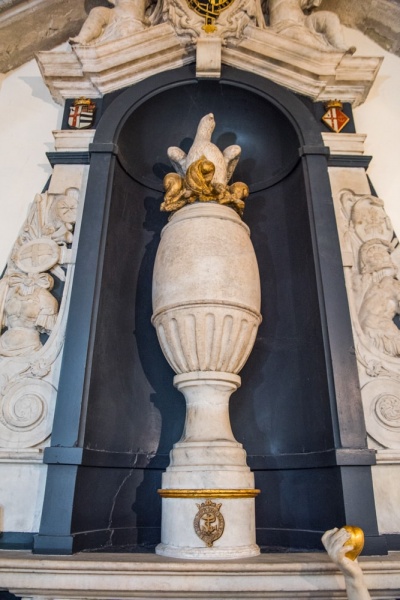 The oldest memorial in the cathedral; is a colourful wall monument to Charles Blount, a knight, who died in 1600. Blount sailed with the Earl of Essex on a 1596 raid to capture Cadiz. When the assault succeeded, Essex knighted the young Blount on board ship. He also knighted so many others of his men that Elizabeth I later complained that he should not have rewarded so many.

Another monument is that of George Villiers, the 1st Duke of Buckingham, who was assassinated at the Greyhound Inn in Portsmouth in 1628 by John Felton. Villiers was the highest-ranking noble in England outside the royal family, and a close favourite - and possibly lover - of King James I. His corrupt leadership and military failures made him extremely unpopular, and he was stabbed to death by John Felton, a disgruntled soldier who felt he had been unfairly passed over for promotion.

A much more uplifting memorial to a military figure is a stained glass window commemorating Admiral Sir Bertram Ramsay, commander of the seaborne forces at Dunkirk.

On the north side of the chancel you can spot a small area of medieval wall painting under a trefoil arch.

Near the south entrance to the Cathedral is the original 18th-century gilded weathercock depicting a sailing ship - the heraldic symbol of Portsmouth.

The cathedral is usually open daily to visitors. 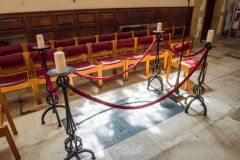 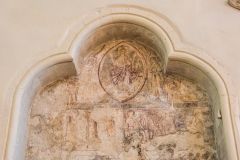 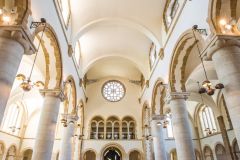 More self catering near Portsmouth Cathedral >>