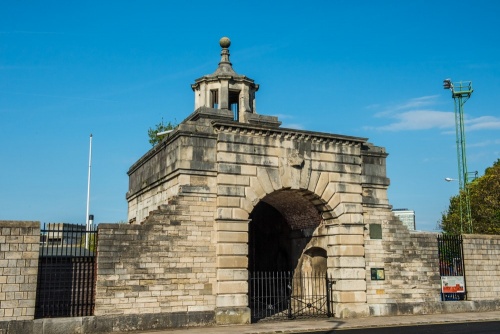 Landport Gate is a ceremonial gateway that once acted as the main entrance to Portsmouth. The gate was built in 1760, and was possibly designed by Nicholas Hawksmoor, though it was not built until after his death. The gate is built of Portland stone and originally stood before a moat, crossed by a drawbridge.

The Gate is composed of a single central arch with a flat top, surmounted by a classical rotunda on columns, topped by a stone ball on a spire. Over the gateway arch is a crown sculpted in relief (standing out from the stone surface).

The Landport Gate is the only one of the town gates of Portsmouth that remains in its original position. It stood midway along the northern defensive walls enclosing Portsmouth, between Guy's Bastion and Town Mount Bastion. The exterior of the gateway faced north-east, but now the only side visitors can generally see is what would have been the original interior face of the gateway. 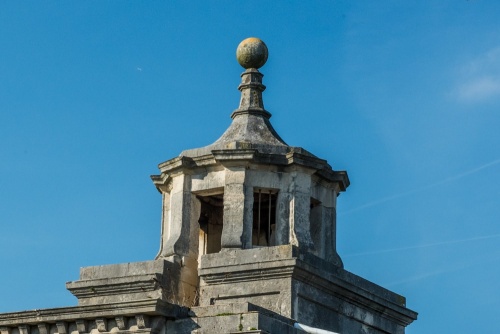 The rotunda and spire

The Gate now rather incongruously provides access to a sports field. At least it would provide access if it wasn't locked, but unfortunately, the gateway passage is usually locked, so you can only view the gate from the west, the side facing onto St George's Road.

Getting to Landport Gate is easy; it is located on the east side of St George's Road, a very short walk from Gunwharf Quay and the Portsmouth Historic Dockyards. There are no brown tourist signs, indeed there is just one small English Heritage information panel beside the gate, but it is impossible to miss. 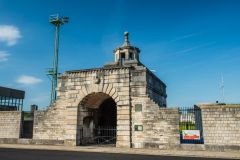 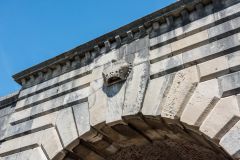 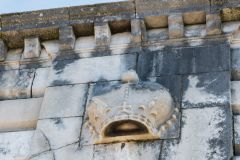 More self catering near Landport Gate >>