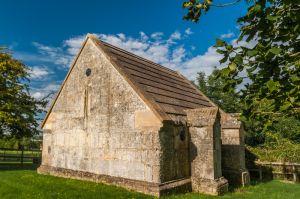 A small early 17th-century building created to house Oxford's first water system. The conduit house was built by Otto (or Otho) Nicholson in 1610. Nicholson's plan was to generate a supply of pure water from the Hinksey hills and pump it into the centre of Oxford through a lead pipe.

Otto Nicholson was a wealthy London lawyer, educated at Christ Church College, Oxford University. After leaving university he made a fortune as a Receiver of Fines (a kind of tax collector). He was acutely aware that his role collecting money was an unpopular one, and at the same time he was keen to ingratiate himself with the royal court, so he became involved in several schemes for the public good.

The Conduit House gathered water from springs in the Hinksey area, and carried it through lead pipes to Carfax Conduit in central Oxford, a distance of 2.3km (about 1.5 miles).

The Carfax Conduit was an extravagantly decorated fountain with two huge cisterns, one each for the city and Oxford University. It was painted and gilded, and decorated with the city, university, and Nicholson coats of arms. It was used until 1789 when it was dismantled and re-erected in the grounds of Nuneham Park, a few miles outside Oxford, where it can still be seen today.

As for the Conduit Hose itself, it looks like a miniature medieval church, with two large gabled buttresses supporting each side wall. Narrow window loops set into each gable end look like arrow slits in a medieval castle wall. Above the slit on the east wall is the Nicholson coat of arms, a cartouche depicting three suns on a heraldic shield. 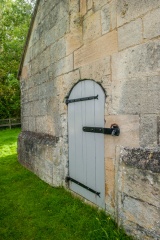 The Conduit House protects a 20,000-gallon lead cistern, fed by channels from springs in the surrounding hills.

The North Hinksey cistern continued to supply water to Oxford until 1868. By the 20th century, it was in a state of decay, and the lead cistern was replaced by a concrete tank in 1961. The roof is a replacement installed in the 1970s, but the walls are original. The walls are covered in graffiti, much of it dating back hundreds of years. The graffiti is extremely easy to read; the oldest we were able to find was dated 1634.

The conduit house is faced with ashlar, supported by thick, gabled buttresses and topped with a moulded plinth.

I found the directions on the English Heritage website confusing, to say the least. For a start, if you are coming by car, do not use the official postcode (OX2 0NA) for your satnav; it will lead you to Ferry Hinksey Lane, on the east side of the A34 Oxford Bypass. If you do go to Ferry Hinksey Lane, you can take a pedestrian subway under the bypass road, onto Harcourt Hill. A more accurate postcode for satnav use is OX2 9AS, which takes you directly onto Harcourt Hill.

There is an English Heritage signboard on the south side of the road marking the entrance to what looks like a private drive. Just follow the drive to its end, where a brown tourist sign marks the start of a short path across farm fields. Oxford is spread out below you to the east, and after you cross the field you will come to the Conduit House in a wooded copse of trees.

The building is within a wooden fence, but you can go inside the fence, where there is an information panel explaining the history of the site. You can't go inside the building; it appears to be permanently closed. You can, however, examine the outside and search for ancient graffiti. There is a 1734 date carved into the wall directly in front of the information panel, but if you go around to the other side of the building you'll find carved initials and the date 1634 on the side of a buttress. 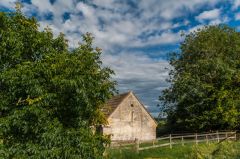 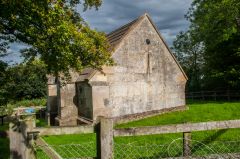 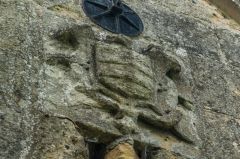 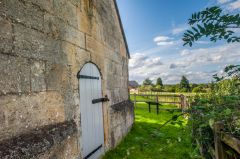 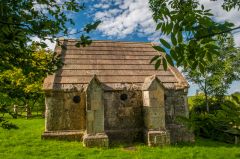