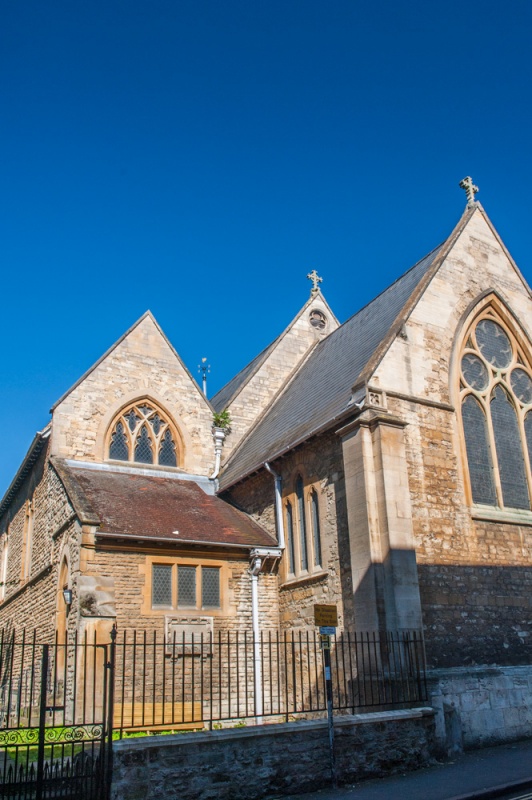 The historic church of St Ebbe's is tucked away on a small lane between Castle Street and St Aldate's, off the beaten track for most visitors to Oxford. Yet those who find their way to the church will be rewarded with a superbly carved Norman doorway, a reminder that there was a church on this spot for well over a thousand years.

Who was St Ebbe?

That's not such an easy question to answer! The usual answer is that the church is dedicated to the 7th-century Northumbrian saint, Ebbe, or AEbbe, abbess of Coldingham. Ebbe was born around AD 605 and was the daughter of King AEthelfrith of Bernicia and Acca, a princess of the royal family of Deira.

Dynastic squabbles between the kingdoms of Bernicia and Deira led Ebbe's mother to flee into exile in Dal Riata, in what is now Scotland. There Ebbe converted to Christianity, and when her brothers Oswald and Oswiu were in turn kings of Northumberland she returned from exile and established a monastery at Ebchester.

She later moved to St Abbs Head to found what became Coldingham Priory, a double-house for both nuns and monks. Ebbe helped spread Christianity among the pagan population of Angles. One of her converts was AEtheldreda, who founded the religious settlement that became Ely Cathedral. Ebbe died in AD 683, and her shrine became a place of pilgrimage. 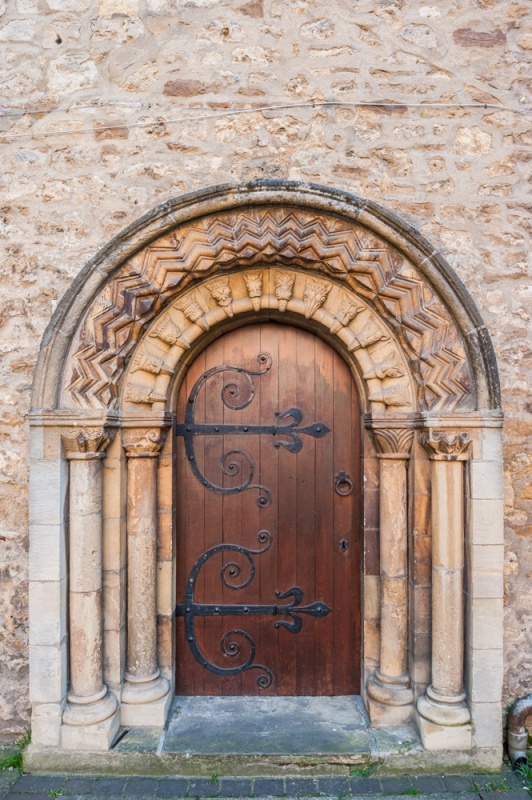 Her cult never spread far beyond her Northumbrian homeland, however, so why is a church in Oxford, far to the south, dedicated to this very regional saint?

The answer may be that there is another Ebbe, an abbess after whom nearby Abingdon is named. The name 'Abingdon' translates from the Old English for 'hill of AEbbe'.

Another alternative is the fame of Ebbe of Northumbria spread south when the remains of her brother, St Oswald, were transferred to Gloucester in the 10th century. Yet another theory is that Ebbe accompanied Oswald when he travelled south to attend the baptism of Cynegils by St Birinius at Dorchester. The pair would have crossed the River Thames at Oxford.

Whatever the reason, there was almost certainly an early Saxon church on this site just outside the Oxford city walls.

In 1005 Ealdorman Aethelmaer founded Eynsham Abbey, and granted the abbey the income from 'ancient St Ebbe's', suggesting that by the early 11th century the church was already centuries old. The mention of St Ebbe's in 1005 makes it the oldest documented church in Oxford.

In 1224 the Franciscans established a friary beside St Ebbe's, just outside the city wall. The friary was given permission to make a small gate in the wall for easy access. The gate lives on in the name of Littlegate Street.

The most famous friar at Oxford was the early scientist Roger Bacon, who died in 1264 and is buried in St Ebbe's parish. He is remembered in the name of Roger Bacon Lane. The rectory for St Ebbe's church stands in what was once the friary garden, in Paradise Square.

The medieval church was composed of a nave, north aisle, chancel, north chapel, west tower, and north and south porches. The tower collapsed in 1648 and the entire church was repaired in 1696. By the early 19th century the building was in dire condition and was pulled down, sparing only the tower and south-west corner of the nave.

The early 19th-century church was comprehensively rebuilt and enlarged by GE Street from 1862-1868. Street, the diocesan architect, added a north and south aisle and removed galleries to increase seating. He also retained several historic monuments from the earlier buildings, including the tomb of Richard Whorwood (d. 1688) and Frances Whorwood (d. 1678).

There are also monuments to William Bodley (died 1717), and his son, John. Windows in the south aisle hold historic glass fragments spanning the 15th-17th centuries. The east window is a memorial to a former rector, Thomas French, who became the first Bishop of Lahore in India. 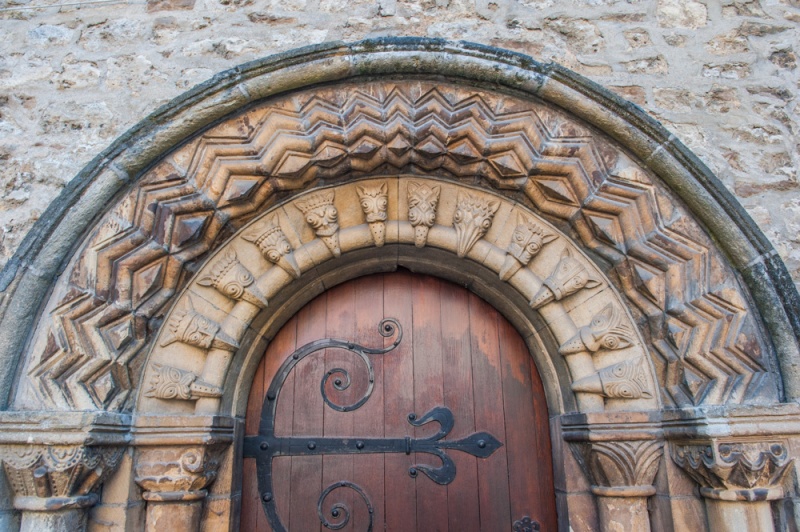 The top of the doorway arch

The prize of St Ebbe's church, however, is the superbly carved Norman west doorway. The doorway may date to AD 1087, when Robert D'Oyley, Constable of Oxford Castle, rebuilt parish churches in and outside Oxford's city walls at his own expense. According to reports at the time, D'Oyley was a harsh governor and seized whatever lands and money he could from the Saxon population.

However, this rapacious baron had a religious vision, and afterwards became a 'nourisher of the poor and a builder and repairer of churches'. It seems reasonable to assume that D'Oyley was responsible for the doorway at St Ebbe's church.

The doorway arch is decorated with depictions of beakheads, grotesque creatures said to represent evil spirits waiting to pounce on people leaving God's church. It seems odd that they would decorate the west door, which would only have been opened to admit church officials, whereas ordinary worshippers would have entered and left by the south door.

At first glance, the beakheads look identical, but if you examine them closely you will quickly see that each is slightly different. One appears to wear a form of muzzle. The outer order of the doorway arch is decorated with traditional Norman chevrons. Two pairs of columns flank the doorway, and each column capital is decorated with different geometric patterns of carving.

St Ebbe's is a very interesting church with a fascinating history, and well worth taking the time to seek out. The church was closed when we first visited, but of course, that didn't stop us enjoying the wonderful Norman doorway. 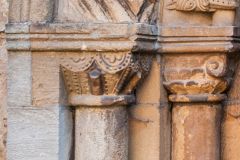 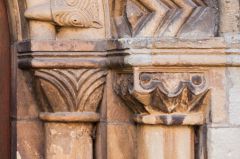 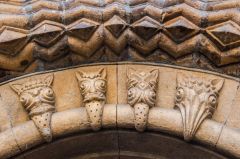 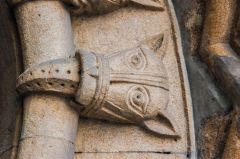 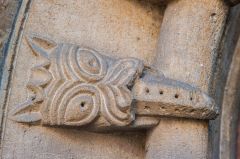