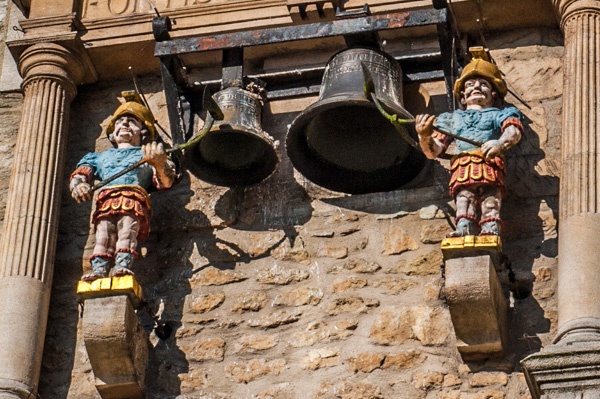 The Quarterboys on Carfax Tower

Carfax Tower stands at the conjunction of St. Aldate's, Cornmarket, Queen Street, and High Street in central Oxford. The name Carfax derives from the French "carrefour", or "crossroads", and the tower's location makes it a good central reference point for touring the old city centre of Oxford.

Though the name Carfax is often used to refer to the tower, it is properly the name of the crossroads, and the tower is, well, Carfax Tower, or if you want to be a stickler for historical accuracy, St Martin's Tower. 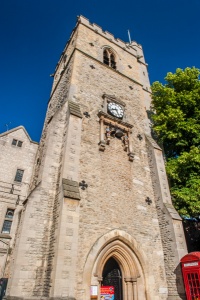 The Tower is all that remains of the 12th century St Martin's Church. The church acted as the official civic church for the city and civic officials were expected to worship there. It is also likely that council meetings were held in the church before there was a dedicated city hall.

At least 20 Mayors of Oxford were buried in the church, dating back to Richard Carey in 1349. St Martins was demolished in 1820 after the building had become unstable, but the 13th century west tower was spared.

The second church opened its doors in June 1822. It was a grand neo-Gothic building with huge traceried windows and a large clock facing onto Carfax. Inside the church was a Corporation Pew for civic officials and, unusually, a Ladies' Corporation Pew.

The Mayor and Corporation appointed the Rector and four City Lecturers. Sermons were given by each of four city lecturers in turn, and it was customary for the Rector to be one of the lecturers.

The second St Martins was pulled down in 1896 when the roads were widened to improve traffic flow. You wouldn't know it was improved, for this is one of the busiest intersections in Oxford and a gathering place for tourists.

When the church was destroyed, the tower was spared. The civic church was moved to All Saints Church on High Street. Stone from the church was purchased by Windlesham House School and used to build their chapel. The Mayor's seat was moved to the new church, then to the Town Hall, and the 14th-century font is now at St Michael's church on Cornmarket.

The tower is now owned by Oxford City Council. If you are fit (or simply determined) a climb to the top of the 74-foot high tower is rewarded by an excellent view over central Oxford. The height of the tower is important to note, for by law no building in central Oxford can be built higher.

Look for the clock on the east side of Carfax. It is a copy of the original church clock, with mechanical figures called "quarterboys" which hammer out the quarter hour on a pair of late 19th century bells. There are also six hand-rung bells, five cast in 1676 and the other two years later by Richard Keene of Woodstock. The bells are sometimes rung by the Oxford Society of Change Ringers to celebrate special occasions.

Carfax Tower is open year-round, though with shorter hours in winter, and there is a small charge. It is well worth it, though, for the views across the city are really something.

As you look down on the busy street scene below it is hard to imagine what it must have looked like in 1355. On the south-west corner of Carfax stands a bank, but in 1355 the site was occupied by the Swindlestock Tavern. On 10 February (St Scholastica Day) a fight broke out between two students and the tavern keeper after the students accused him of selling poor quality beer.

The fight escalated into two days of violence between 'town and gown' factions, known as the St Scholastica Day Riots, which resulted in about 30 deaths. The legal wrangling that ensued settled affairs in favour of the university, and for 470 years the mayor and councillors had to walk bare-headed through the streets on St Scholastica's Day to pay a fine of one penny for every student killed (a total of 5s 3d).

Behind the tower is a solitary gravestone, commemorating William Butler, former Mayor of Oxford, who died in 1865 and was buried in the grave of his wife Elizabeth and their two infant daughters. When the church was demolished the grave was missed and remains in place.

More self catering near Carfax

More bed and breakfasts near Carfax