Lost within a tangle of Tudor college courts that make up Christ Church College is the smallest cathedral in England. The cathedral is Norman, with Victorian rebuilding, but its roots go back deep into the Saxon era, when a church grew up here around the shrine of St Frideswide. 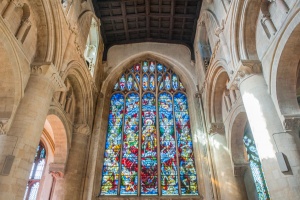 Who was St Frideswide?

Frideswide (or Frithuswith in its original Saxon spelling) was the daughter of a Mercian sub-king named Dida, who ruled an area near Eynsham, in western Oxfordshire. She was born around AD 650, and with the help of her father she founded a priory at Oxford. Despite her vows of celibacy a Mercian king named Aethelbald wanted to marry her. When she refused, he tried to kidnap her, and she fled.

Depending on which version of the tale you read, the king is struck blind when he tries to force himself on Frideswide, or he falls off his horse and breaks his neck while searching for her. Frideswide was also associated with a nunnery at Binsey, on the west bank of the Thames. A holy well said to have healing properties sprang forth from the earth in answer to her prayers, and the well can still be visited today.

Frideswide was the abbess of her monastery until her death around AD 727, and she was buried in the abbey. The entire site was destroyed in the violence that accompanied the St Brice's Day Massacre of 1002, when King Ethelred the Unready ordered all Danes in the kingdom to be killed. An Augustinian monastery was established on the same spot, and it is generally believed that Christ Church Cathedral stands atop the Saxon priory church.

In 1180 Frideswide's remains were moved into a new shrine in the monastery church, an event witnessed by Henry II in person. Frideswide was declared the patron saint of Oxford University and the city as a whole. Throughout the medieval period, the shrine of St Frideswide was a popular place of pilgrimage, but it was heavily damaged during the Dissolution of the Monasteries under Henry VIII. 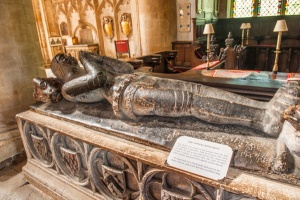 The shrine was restored under Mary I in 1588, however a later Calvinist canon named James Calfhill was determined to stamp out the cult of St Frideswide. He damaged the shrine badly and mixed the saint's bones with those of a woman named Catherine Dammartin. The bones remain mixed together to this day.

In 1546 the monastic church became the cathedral church of the Oxford diocese, at the same time as it was being absorbed into Henry's new Christ Church College. It is now both a cathedral and the college chapel. When Tom quad was being built between 1525-9 the original Norman church nave was pulled down. As a result, the cathedral we see today is only a fraction of its original size, but that fraction has plenty of historic interest!

You enter directly into the choir, an astonishing space built between 1158-90, with an astoundingly rich vaulted ceiling added around 1500. This ceiling is a superb piece of late Perpendicular work, with beautifully detailed pendants descending from the vaulting bosses. It was designed by William Orchard and consists of a dozen pendants linked by lierne vaulting ribs that intersect to create eight-pointed star shapes.

The Lucy Chapel has several fascinating memorials to Royalist supporters who fought in the Civil War. Charles I made his headquarters in Oxford during the war and many leading Cavalier soldiers were brought to the cathedral for burial. Other notable memorials include that of Robert King (d. 1557), the last abbot of Osney, who later became the first Bishop of Oxford.

A grave slab to philosopher John Locke (d. 1704) is set in the floor of the ante-chapel, beside one to art critic John Ruskin (d. 1900). Both attended Christ Church College. In the Chapel of Remembrance is a memorial to Edward Pusey, one of the leaders of the Oxford Movement, and nearby is a modern tablet to poet WH Auden, who often worshipped in the chapel. 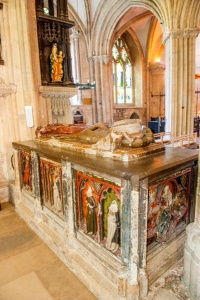 Much earlier are 3 medieval tomb chests in the north transept. These include a canopied tomb to Prior Alexander Sutton (1316), a slightly later one of Lady Elizabeth Montacute (d.1354) and an early 15th-century monument to Sir George Nowers.

The east end, with its large wheel window, is the work of Sir George Gilbert Scott. In the south aisle and the Lucy Chapel wonderful examples of 14th century stained glass. The chapel glass, dating to about 1320, depicts the martyrdom of St Thomas Becket. This window is a remarkable medieval survival, as Henry VIII ordered all likenesses of Becket to be destroyed at the Reformation. The window survived because Becket's face was removed and replaced with clear glass. There is more 14th-century glass in the Latin Chapel.

The centrepiece of the cathedral, however, is Frideswide's shrine, in the Latin Chapel, overlooked by a 19th-century stained glass window designed by Pre-Raphaelite master Edward Burne-Jones, who also designed 4 other windows around the cathedral. The shrine dates mainly to 1289 and is a magnificent example of 13th-century carving. Miniature faces peer out from stone folds of foliage, and Purbeck marble columns divide the shrine into two bays. 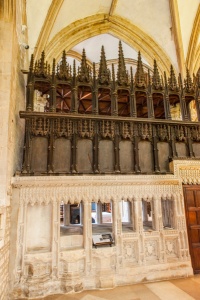 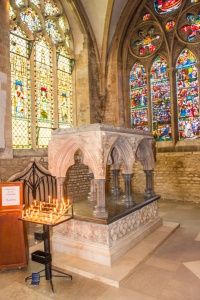 The cathedral is normally open weekdays and Sunday afternoons. Since the cathedral is part of Christ Church College it can also be visited during college opening times. If you visit as part of touring the college you have to use the main visitor entrance off St Aldates, and you do have to pay a fee. As of this writing, there are free guided tours on weekdays, starting from the main cathedral entrance. 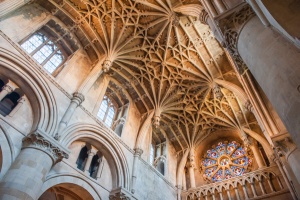 The chancel arcades and ceiling 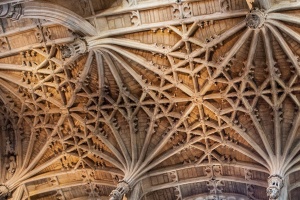 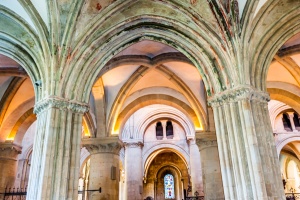 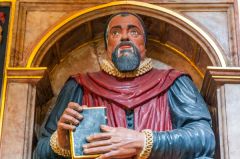 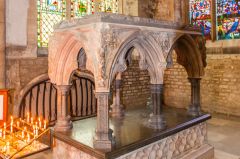 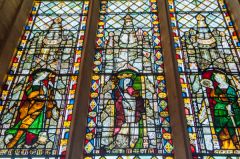 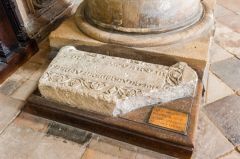