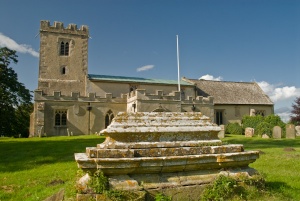 St Mary's is a 13th-century church with numerous additions and alterations from the 14th to the 17th centuries. The chancel screen is said to have been a gift to Longworth church by Archbishop Laud, perhaps when he was chancellor of Oxford University from 1629-1633. Other features of note include some very nicely carved medieval heads decorating the nave arches.

Set onto the north wall of the chancel are three memorial brasses. At first glance, they appear to be medieval, but looks can be deceiving; the central brass is modern, made in the style of earlier medieval examples. It depicts Dr John Illingworth, rector at Longworth from 1883-1915. Dr Illingworth was a member of an influential theological group who met every summer in the Old Rectory.

The group, which included Bishop Gore, wrote a popular series of essays known as Lux Mundi (Light of the World) in 1889. When Dr Illingworth died in 1915 his fellow theologians donated stained glass in the Arts and Crafts style for the 15th-century east window.

Another gift in honour of Dr Illingworth was the wooden pulpit, donated in 1914 by an American group who appreciated his essays. 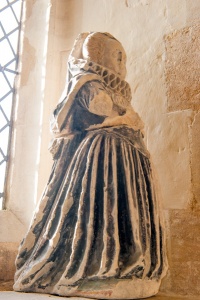 Flanking Dr Illingworth's brass are authentic medieval brasses, one to John Hencle, rector of Longworth in 1422, and Elynor Godolphin of Hinton Waldrist. Further late medieval brasses to Richard and Joan Yate of Charney Manor are opposite on the south wall. Interestingly, Richard and Joan are shown in their shrouds, an unusual portrayal. Below are the couple's 14 children, of whom only four survived childhood.

In the vestry is a memorial tablet to Sir Henry Marten (d. 1641), a Judge on the High Court of Admiralty. Sir Henry's son is more well known than the father; the younger Henry Marten is known to history as 'ungodly Harry', one of those who signed the death warrant of King Charles I in 1649.

There was a monument to the Marten family under the tower, but this has been destroyed. Only a fragment remains; a small statue of a woman, which now sits upon the sill of the west window. It is entirely possible that the Marten tomb was destroyed after the Restoration of the Monarchy as an act of revenge by agents of Charles II against the families of those responsible for his father's execution. 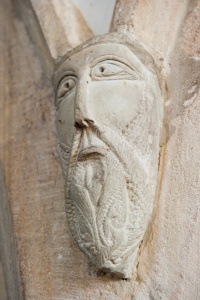 Carved head in the nave

Other 'sons of Longworth' are more fondly recalled by history. Both were sons of former rectors. The first is John Fell, born in 1625, who rose to become Dean of Christ Church, Oxford, and Bishop of Oxford. Fell was not universally popular, as evidenced by the epigram by Tom Brown, a student and later a satirist, who was faced with Fell's disciplinary heavy hand:

The second famous son of a Longworth rector is RD Blackmore, born exactly two centuries after John Fell, who went on to write the popular novel Lorna Doone. 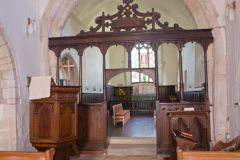 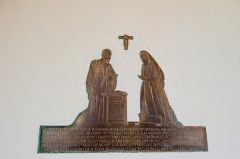 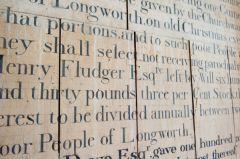 About Longworth
Address: Church Lane, Longworth, Oxfordshire, England, OX13 5DY
Attraction Type: Historic Church
Location: Longworth is just north of the A420, one mile north of Kingston Bagpuize. There is a small parking area outside the church, which is beside the manor house.
Website: Longworth
Location map
OS: SU383994
Photo Credit: David Ross and Britain Express

More self catering near Longworth

More bed and breakfasts near Longworth