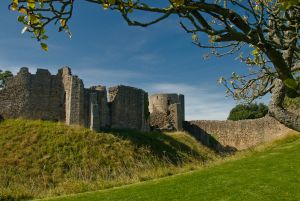 This imposing castle overlooking the River Tees was probably begun by Guy de Baliol about 1095. De Baliol's fortress consisted of a ring work, which is now the inner ward. The Baliol family owned the castle for two centuries and founded the town of the same name that surrounds the castle. In the early Middle Ages, Barnard Castle was one of the strongest and most imposing fortresses in the north of England.

The castle passed through the hands of some of the most powerful families in England. It was owned by the Beauchamps, Earls of Warwick, and later by the Nevill family. It was also a crown possession, and it was claimed by the powerful Bishops of Durham, who made several bids to occupy the castle over the centuries.

The castle's most famous moment came in 1569 when it was besieged for 11 days by rebels during the 'Rising of the North'. Though the castle was taken by the rebels, the stout defence meant that the rebellion foundered and was ultimately unsuccessful.

The castle is composed of an Inner Ward, the original castle site, which boasts a tall Round Tower and remains of a great hall and kitchens. The Inner Ward is surrounded by the Great Ditch, a moat separating it from the Middle Ward and Town Ward. Within the large open space of the Town Ward is a modern herb garden featuring plants used in the medieval period.

You enter the castle through the North Gate, which gives access to the Town Ward, so named because it was used by the townsfolk of Barnard Castle during times of trouble. In one corner of the Town Ward is the Dovecot Tower, where we can see nesting boxes for this important medieval source of food.

Much smaller than the Town Ward, this area served to join the Town Ward and Outer Ward to the Inner Ward. We can see the remains of the moat that separated this area from the other wards. At one side is the Constable Tower, which stands over the original castle entrance.

The original part of the castle, the inner ward has been expanded and strengthened many times. On entering you see remains of the Headlam Tower, the original 12th-century gatehouse. You can see foundation walls of the kitchen block, at the far end of which is the Mortham Tower, a 14th-century structure created to provide residential quarters.

Off this tower is the Great Hall, the hub of castle life. Above the hall was the Great Chamber, the private chamber of the lord. This area features a large 15th-century oriel window. This was possibly added during the brief lordship of Richard III, as suggested by the armorial carving of a boar, Richard's symbol, into the ceiling of the window enclosure.

The most imposing remaining structure in the Inner Ward is the Round Tower, where the lord has his sleeping quarters. You can ascend the tower for wonderful views over the castle and the River Tees below. In the vaulted cellar of the Round Tower is a covered well, beside which, rather incongruously, stands a stone coffin.

For more, read our Barnard Castle History article (link below).

More self catering near Barnard Castle >> 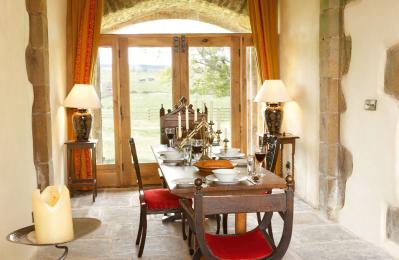 Scargill Castle nestles in beautiful Teesdale, close to the Yorkshire Dales and Lake District National Parks. Built in 1560, it has recently been restored into a delightful retreat for two, …
Sleeps 2 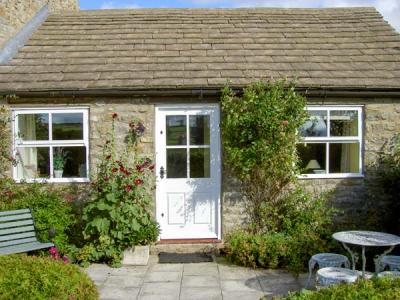 This all ground floor cottage is in a countryside location two miles from Barnard Castle and sleeps two people in one bedroom.
Sleeps 2