HERITAGE HIGHLIGHTS:   The Silver Swan, an automaton made in 1773 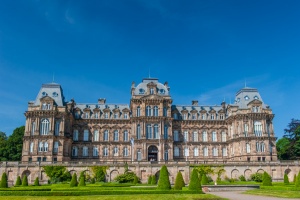 The lovely Teesdale market town of Barnard Castle is not necessarily where you would expect to find one of the most prestigious museums of fine arts in Europe. The Bowes Museum stands like a jewel amid the picturesque surroundings of this historic town, a testament to the vision of John, and Josephine Bowes.

John Bowes was the illegitimate son of the 10th Earl of Strathmore and Mary Millner, who worked on the Earl's Teesdale estate. Millner lived with the Earl as his wife for years, though they only married just a few hours before his death. The Earl hoped that by marrying John's mother he could pass his title and estates to the young Bowes. A lengthy legal squabble, however, settled the Earl's Durham estates on John but gave his title to his Scottish relations.

John Bowes was not deterred, however. He was educated at Eton and became wealthy by developing his Durham estates for coal. He travelled widely in England and France, following his growing passion for the arts.

He even bought a theatre in France, and one of the performers at his new entertainment venue was an actress named Josephine Coffin-Chevalier. The couple married in 1852 and it was not long after that they began to hatch plans for a museum aimed at bringing the world art closer to the people in John's ancestral home of Teesdale. 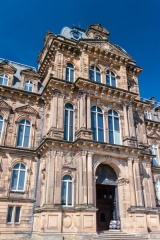 John and Josephine Bowes wanted to create a truly world-class museum, filled with the finest of fine arts, to bring culture to the local inhabitants. Their vision was broad, covering fields as diverse as textiles, pictures, metalwork, ceramics, sculpture and pieces of historical interest.

Their new museum needed a home suitable for the collection they envisaged. Construction began in 1869 on what can only be described as a French chateau in the midst of the Durham Dales. Everything was of the finest quality, from the building stone to the fittings.

Over the years 1862-1874 the couple purchased some 15,000 art objects, from paintings to ceramics, silver to fine furniture. They were among the first British collectors to collect works by Goya and El Greco, and often purchased works on the advice of their French art dealers even when the works themselves did not appeal to their own tastes.

Unfortunately, Josephine died in 1874 and John Bowes was so stricken with grief that he almost stopped his collecting efforts. The museum was not finished until 1892, long after John's death. The result, however, was worth the wait, for the museum is one of the finest in Britain, and the building itself is almost as interesting as its contents.

Collections full three floors of this superb building, with paintings by such luminaries as Canaletto and Goya, Sevres fine porcelain, or intricate marquetry by Charles Boule, everything is of the highest quality. Thee are galleries devoted to Fashion and Textiles, including period costume. Some of the clothing on show belonged to the Empress Eugenie of France.

Perhaps the most popular single item is the Silver Swan, an automaton created in 1773 by John Merlin. The Bowes saw the Silver Swan at the Paris Exhibition of 1867. So did American author Mark Twain, who described it in his novel The Innocents Abroad. The Bowes purchased the Silver Swan for £200 in 1872. The Swan still works and is 'played' once a day at 2 pm. 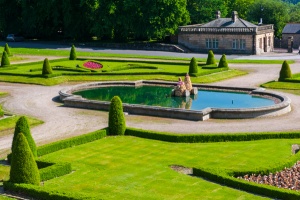 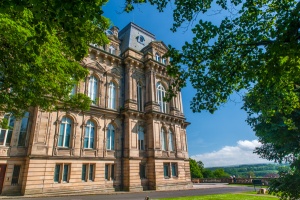 The museum from the side 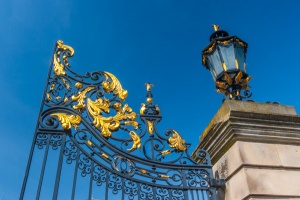 More self catering near Bowes Museum