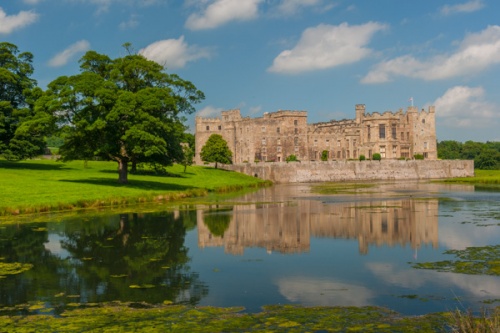 This profile of Raby Castle could easily be subtitled: "A Tale of Two Families", as the story of the castle is so closely linked with the powerful Nevill and Vane families. It was the Nevills who built Raby Castle in the 14th century as an imposing fortress composed of a curtain wall with eight massive towers surrounding a central keep.

The original defensive purposes of Raby Castle is emphasized by the fact that the only entrance is through a fortified gateway accessed by a narrow path across a moat. However, the moat has long been converted to a lake, and the curtain wall reduced to a simple parapet.

The Nevills held Raby until 1569 when it was forfeited to the crown following Nevill support for the failed Rising of the North. The castle remained in crown hands until 1626 when it was purchased by Sir Henry Vane the Elder, Treasurer to Charles I. Vane family descendants live at Raby still. 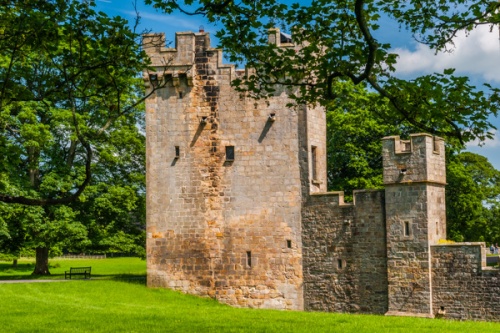 Sir Henry thought little enough of the castle, calling it "a mere hullock of stone"; he bought Raby for its value as an estate. Nevertheless, he entertained Charles here on two occassions. Sir Henry eventually fell from royal favour and became a firm supporter of Parliament in the Civil War.

His son Henry Vane the Younger was such a vociferous radical that he was eventually executed for treason when Charles II regained the throne at the Restoration. In the meantime Raby Castle was attacked by royal forces on five separate occasions during the Civil War.

However, Raby was soon to suffer much graver damage from family squabbles than the damage caused by war. Lord Barnard, the grandson of the elder Henry Vane, was so angered by his son Gilbert's marriage that he took steps to demolish the building so that Gilbert could never enjoy his inheiritance.

Lord Barnard pulled up floors, stripped lead from the roof, and sold furniture from Raby. Gilbert was forced to bring a lawsuit to stop his father's actions, though Lord Barnard still managed to kill all the deer in the park and cut down most of the trees. 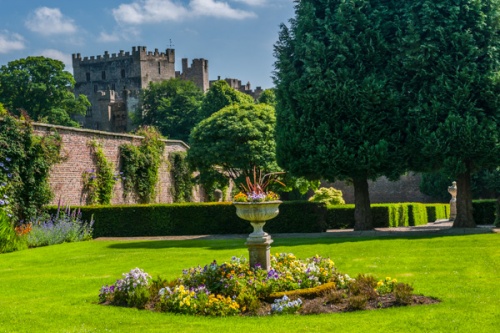 Gilbert finally succeeded to his estate in 1723. He set himself to the task of repairing the damage done by his father to the estate, but it was left to his son, Henry, later Earl of Darlington, to repair the castle itself. Henry called in James Paine to help transform the interior of Raby Castle into a series of comfortable Georgian rooms.

This process was carried on by the 2nd Earl with the aid of architect John Carr. Together they created a massive mock-Gothic entry, wide enough for a carriage to be driven through. In fact, this was precisely what it was used for; carriages too large to turn around in the tiny inner courtyard were driven straight into the entry hall and pulled up before the fire!

Still more renovation was to follow in the 1840s when William Burn made extensive interior alterations for the 2nd Duke of Cleveland, including the octagonal Drawing Room and the south front.

The exterior of this front was built of masonry, which rather stuck out as a visual eyesore against the surrounding medieval stonework. Repeated attempts to stain the modern masonry failed, but finally, in the 1870s an old Sussex mason gave the 4th Duke a recipe involving quantities of bullock's blood, and that did the trick!

The interior open to visitors today is a pleasant mix of 18th and 19th-century styles, furnished in gilded elegance augmented by a variety of sporting prints and paintings. In the former medieval great hall, the original minstrel's gallery still stands, and some of the windows are original also. The original structure can be seen most clearly in the kitchens, which date to 1360.

Raby Castle is reputedly haunted by three ghosts. The spectre of Charles Nevill is seen in the Baron's Hall, where in 1569 he plotted the rebellion known as the Rising of the North. The headless ghost of Henry Vane the Younger haunts the library, and the first Lady Barnard stalks the halls knitting with white-hot needles, seething over the memory of her son Gilbert, who dared to marry against her wishes. 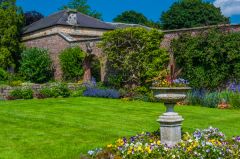 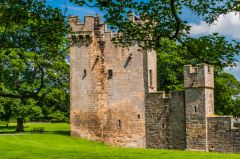 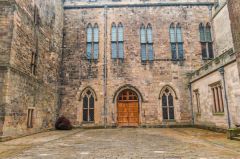 More self catering near Raby Castle

Self Catering near Staindrop