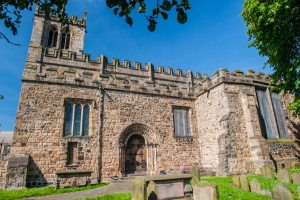 The medieval church of St Mary's stands in the centre of Barnard Castle, a few steps from the iconic market cross that is the signature building of this attractive market town in upper Teesdale.

St Mary's was founded around the year AD 1130 by Bernard de Balliol, who rebuilt the nearby castle begun by his father. The church originally acted as a chapel for the castle, but then took on the role of a parish church for the borough that began to grow up around the Norman fortress. The living was granted by Balliol to St Mary's Abbey in York, and passed to Trinity College, Cambridge, after the Dissolution of the Monasteries.

The oldest part of the building we see today is a part of the north chancel wall. The original Norman church was a simple building, consisting of an aisleless nave and a long chancel. Bernard Balliol II added a north aisle around 1150, with Norman columns decorated with odd beak-like carvings.

A west tower was added in 1270 and heightened in 1772. Within the tower entrance is a memorial plaque to Captain Augustus Webb, who was fatally wounded during the infamous 'Charge of the Light Brigade' during the Crimean War.

In the north aisle is another poignant reminder; a memorial to the men of the Durham Light Infantry who died in the South African wars of 1899-1902. Nearby is a blocked doorway that once gave access to the north porch, built by Richard, Duke of Gloucester, later Richard III.

In the north transept, added in 1380, are two recessed tomb niches. The westerly one contains a very nice recumbent 14th-century effigy of a priest named Robert de Martham, vicar of Gainford, holding a chalice in one hand while the other hand is raised in blessing.

The easterly niche contains a finely carved 14th-century grave slab of a priest, decorated with a floriated cross. Set on the wall nearby is perhaps the most intriguing memorial carving in the church; a fragment of a 14th-century sculpture depicting St Anthony the Egyptian Eremite, flanked by a pair of upright boars. This fragment may have formed part of a larger tombstone. 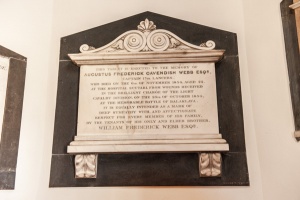 Almost under the carving fragment is the very peculiar 15th-century marble font, one of the finest in County Durham. This oddly-carved font was made around 1485 and is remarkably large. It has mysterious carved symbols on shield arranged on each face and on the base. No one knows for certain what the symbols mean, but they may be some sort of medieval guild insignia.

The chancel arch is 15th century, and was built at the time when Richard of Gloucester was lord of the manor at Barnard Castle. On one side of the arch is a carved head that may represent Edward IV, and on the other is a very worn head supposed to be Richard III himself. In the chancel itself is a Jacobean communion table dating to the early 17th century. It stands beneath a very finely made east window in Geometric style, inserted around 1260. 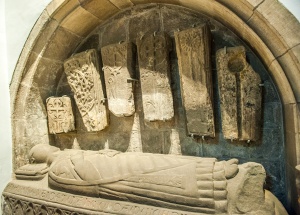 Two of the best historic features of St Mary's are not immediately apparent. To find them you have to exit the church and turn left, following the path around the tower to the south side. Set into the nave wall is the original south doorway, a beautiful example of early Transitional architecture, dating to around 1170.

This was almost certainly the original entrance door and was relocated when the south aisle was added in the late 13th century. The doorway consists of three orders, with traditional Norman nail-head moulding.

Immediately to the left of the south doorway is my favourite feature at St Mary's, a table tomb to George Hopper of Black Headley, Northumberland. Hopper died in 1725 at the age of only 23, but he left behind this wonderful monument, decorated with evocative figures.

One carving shows an effigy in bas relief, wearing a tricorn hat, bearing flowers in one hand. On the south side of the tomb is a grotesque skeletal figure, a reminder of mortality, armed with a scythe and accompanied by the reminder that 'Death cuts down all, both great and small'.

Most people come to Barnard Castle to visit the castle and the Bowes Museum, each only a short walk from the market cross. How many leave without seeing this beautiful church? St Mary's was open when we visited, even though it was well past 5 pm. 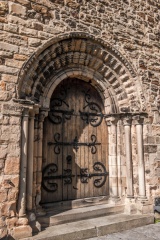 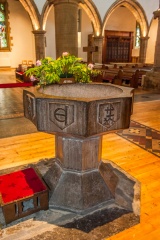 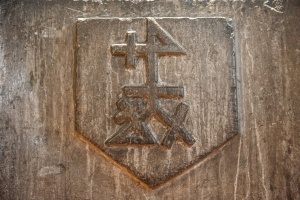 A mysterious symbol carved on the font 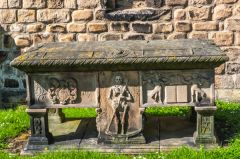 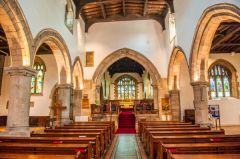 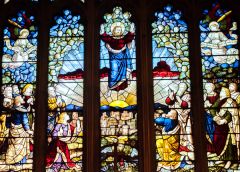 More self catering near Barnard Castle