HERITAGE HIGHLIGHTS:   The Bone Stone is the largest standing stone on Dartmoor 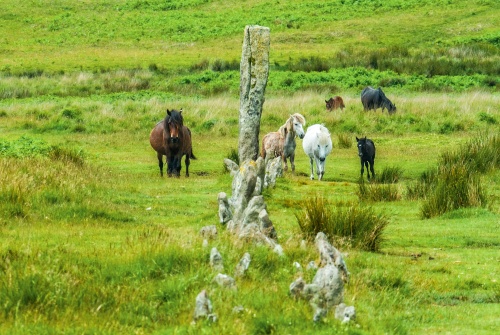 The moors at Drizzlecombe, near Sheepstor village, are a Wonderland of prehistoric remains, a ceremonial landscape dotted with standing stones, some arranged carefully in long rows, others standing like lonely sentinels. Aside from the stone rows, there are the remains of settlements, hut circles, stone-lined burial chambers, and barrows in a bewildering arrangement.

The name Drizzlecombe sounds unappealing, but its roots are not nearly so drab; it comes from the word combe, for a valley, and 'Drishel', for a thrush, so the actual meaning is 'valley of the thrush'. 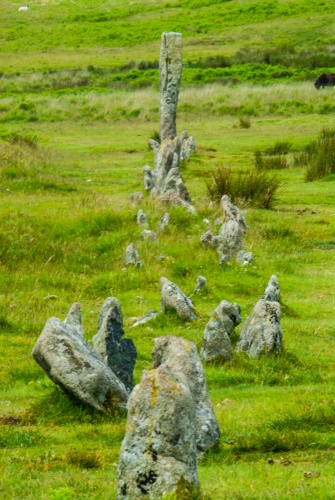 The southern stone row at Drizzlecombe

Most are arranged along the River Plym, others atop the low moors that rise up on either side of the river. Footpaths criss-cross the moor, allowing access to the most impressive monuments, set on a low-lying spur of land between the river and Drizzle Combe.

Three stone rows are laid out along the slope of Hartor Hill, each row terminated by a tall standing stone at one end and a cairn at the other. The rows are aligned southwest to northeast, with the standing stone at the southwest end and the cairn at the northeast. Between the terminus stones and cairns are small stones aligned in rows. Most of these stones are quite small, less than 0.5 metres high. 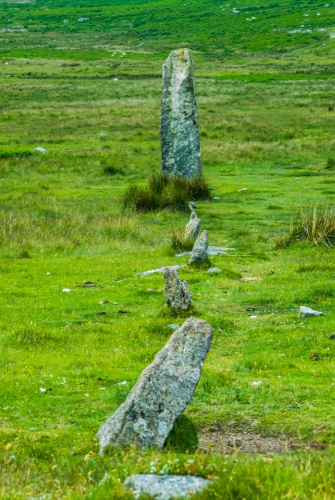 The easternmost row is noticeable for its extremely large standing stone, called the Bone Stone, thought to be the tallest on Dartmoor. The Bone Stone stands 4.2 metres high (about 14 feet) and has a curious protrusion at the top, like a banner on a flagpole.

At some point in its long history, the Bone Stone must have fallen, for it was re-erected by archaeologists in 1893. The Bone Stone stands at the end of the shortest stone row, with a dozen or so small stones leading uphill to a damaged cairn.

Running almost parallel to the eastern row is the north row, a single row but much longer, with about 70 low stones arranged over 150 metres. The north row terminates in a much small standing stone, about 2.4 metres in height.

The southern row is perhaps the most interesting of the three rows. It is also about 150 metres in length, with about 70 standing stones and another dozen or so that have fallen. This row starts as a single row like the other two rows, then becomes a double row, then returns to a single row again before terminating at a three-metre tall standing stone.

It seems likely that all three stone rows were built at the same time, during the Bronze Age. 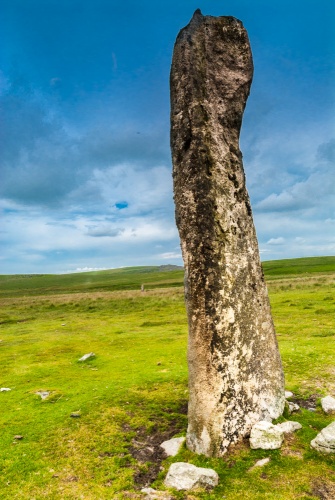 Near the gap between the east and south stone rows is a large cairn known as the Giant's Basin. This striking cairn is about three metres high and 22 metres across. It seems curiously out of place beside the stone rows and may be a later addition to the site. The cairn was robbed of stones to build rabbit warrens at Ditsworthy, just down the River Plym from Drizzlecombe.

On the same spur of land where you will find the stone rows are the remains of at least five settlement sites and a large number of cairns in addition to a stone-walled cist.

If you are lucky you will see Dartmoor ponies wandering among the stone rows. I was delighted to see a herd of ponies walking through the rows when I visited, followed by a pair of cows who stopped to rub their flanks on the standing stones.

The easiest way to reach Drizzlecombe is to take the lane leading due east out of Sheepstor village. The lane terminates at a parking area. A footpath leads east from the end of the lane, then forks. Either branch will do.

The most northerly branch leads up a spur of Hartor Hill where it joins another trail leading back down Drizzle Combe. After a few hundred yards you have to leave the trail and climb the low rise to the stone rows, which are easily visible.

You can return the same way or make it into a circular walk by rejoining the footpath and turning north at Ditzworthy Warren House before returning to the car park. As with all excursions on Dartmoor, an OS map is very useful, and please do take sensible precautions with footwear!

Do take the time to explore Sheepstor, used by director Steven Spielberg for his film War Horse. 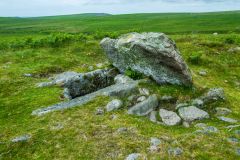 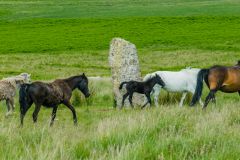 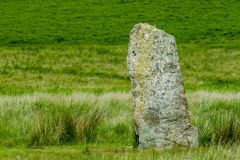 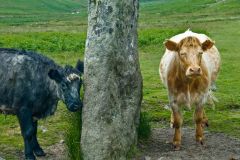 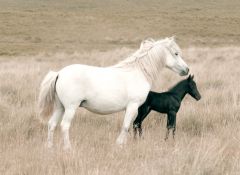