HERITAGE HIGHLIGHTS:   Roman bricks are incorporated into the Gateway 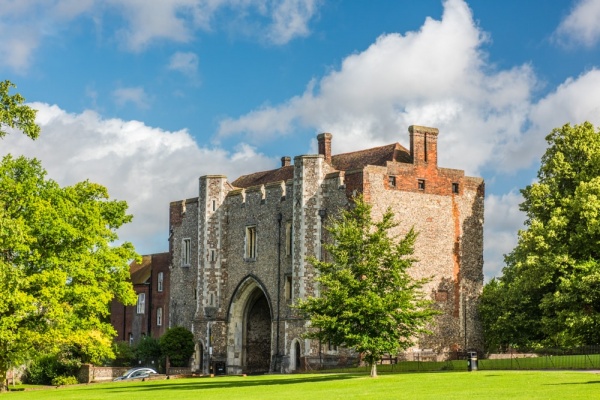 Sometime around AD 793, King Offa of Mercia founded a Benedictine monastery at St Albans, built around the shrine of Alban, England's first Christian martyr. During the medieval period, St Albans Abbey became one of the most important monasteries in England, and pilgrims flocked to the abbey to visit St Alban's shrine.

The Abbey was a centre of learning, with three famous medieval chroniclers, Matthew Paris, Roger of Wendover, and Thomas Walsingham all serving as monks, not to mention Nicholas Breakspear, who rose through the church to become Pope Adrian IV.

The only part of the medieval abbey to remain today - apart from the Cathedral itself - is the imposing Abbey Gateway, now part of St Albans School.

The Gateway was built by Thomas de la Mere, the 30th Abbot of St Albans, who took office in 1349 when his predecessor died in the Black Death along with 47 of the 60 resident monks. 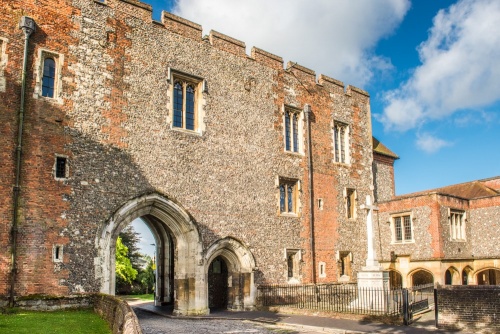 The Gateway from the north (Romeland) side

De la Mere had the Abbey walls rebuilt and strengthened, but that did not prevent the gateway from being destroyed in a storm in 1362. De la Mere ordered a larger, stronger gateway to be built, and it is this mid-14th-century building we see today.

The Gateway not only controlled access to the Abbey precinct, but it also served for a time as the town gaol. It became a focal point for unrest in the 1381 outbreak of social unrest known as the Peasant's Revolt. Angry peasants in the south rioted against the oppressive poll tax and demanded social reforms.

In St Albans, rioters broke into the Gateway and freed some of the prisoners. They attacked the Abbey itself and most of the monks fled. Abbot De la Mere stayed and tried to negotiate with the rioters.

Then news filtered through from London that the Revolt's leader, Wat Tyler, had been killed, and the rebel's resolve faltered. The leaders of the St Albans rebels were locked up in the Gateway prison and later hanged in the presence of King Richard II. The King ordered the townsfolk to pay for the damage they had caused to the Gateway and the abbey.

In the aftermath of the Revolt, relations were tense between the monks and the townsfolk. The Gateway came to represent conflict and was a focus for local unrest. Whenever the tension rose, townsfolk would gather in front of the Gateway. 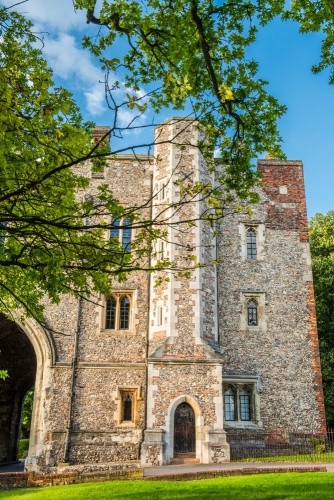 The Gateway from the south (Abbey Mill Lane) side

When Henry VIII dissolved St Albans Abbey in 1539 most of the monastic buildings were torn down. The only buildings to survive were the Abbey church, now St Albans Cathedral, and the Abbey Gateway.

Ownership of the Gateway passed to the Crown and it continued to be used as a prison. Conditions inside the prison were poor, and prisoners had to raise money to buy fuel for a warming fire by dangling an old shoe from a string and begging for alms from passers-by.

In 1479 the Gateway was home to just the third printing press ever established in England, established under the auspices of the Abbey. We only know one book printed at the press; a school textbook, which seems appropriate given that the Gateway now forms part of St Albans School. When a new County Prison was built in 1866 the medieval gateway was no longer needed to serve as a gaol so it was sold to the Grammar School Trustees in 1867.

The School is one of the oldest in the world. Former students include Nicholas Breakspear, a cleric who went on to become Pope Adrian IV. While Breakspear's career led to worldly success, the same cannot be said for another student, John Ball, one of the leaders of the 1381 Peasant's Revolt. Ball was hanged, drawn, and quartered in St Albans for his role in the Revolt. A more recent alumnus is physicist Stephen Hawking. 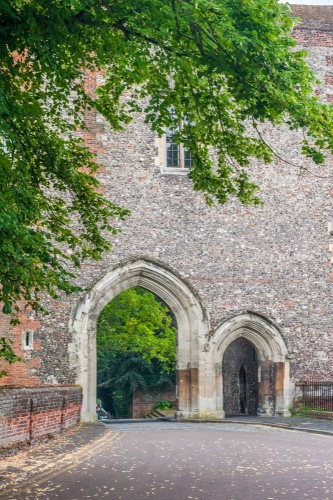 Approaching the Gateway from Romeland

The Abbey Gateway is incredibly easy to visit. It stands immediately outside the Cathedral precinct, a few steps from the Cathedral's west front entrance. The Gateway straddles Romelands where it joins Abbey Mill Lane.

Though the Gateway is part of the adjoining school, you can walk under the 14th-century arch and view the building from either side. There are two arches; a large central arch spanning the roadway and a smaller pedestrian arch to one side. Both arches are in beautiful pointed Gothic style.

The Gateway structure is built of rubble and brick, and in many places you can see Roman brick incorporated into the walls. Unfortunately, there is normally no access to the Gateway interior.