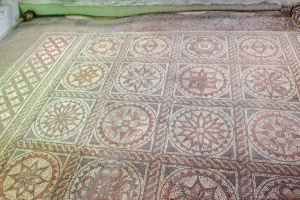 During the 1930s archaeologists Sir Mortimer Wheeler and his wife Tessa excavated large areas of the Roman town of Verulamium on the fringe of modern St Albans. One of their major finds was an 1800 year old underfloor heating system, or hypocaust, which ran under an intricate mosaic floor. The section of flooring we see today is only about half of the original floor.

The floor is composed of small tesserae, or cubes of stone or tile. The tesserae are set into a thin layer of mortar on top of a concrete underfloor. The mosaics were grouted with mortar and polished with fine-grained stones. They may have had a final polishing with beeswax to enhance the shine, much as we might apply polish to a modern floor.

The floor is thought to have been part of the reception rooms of a large town house, built around AD 200 near the route of Watling Street, the major Roman road that ran past Verulamium. The Wheelers decided to leave the mosaic in place rather than risk damage by moving it to a museum. 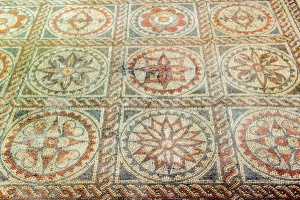 The floor is composed of a central section with 16 square panels, each containing a circular roundel with a geometric design. The borders are bands of single and double interlace and strips of wide and thin dark and light material.

I must admit I wasn't impressed by the modern building that houses the hypocaust; from across the wide green expanse of Verulamium Park it looks like a whitewashed garden shed, built low to the ground, with a wide, projecting roofline. I'd have preferred something more in keeping with the Roman heritage of the site, but that's nitpicking; for the actual mosaic and underfloor heating system are beautifully presented. You can walk around the outside of the mosaic on a galleried walkway, looking down onto the floor below.

Through rents in the mosaic, you can see the hypocaust system beneath. As with many Roman mosaics in situ, this appears somewhat dusty or faded, so you have to use some imagination to guess how it would have looked when freshly laid. It would have been mighty impressive!

The design is fantastically intricate and is a real pleasure to study. Each of the main 16 panels shows a geometric design; there are no depictions of animals or gods; if anything, it looks like what you might see in a kaleidoscope. The attention to detail is staggering, and the effect really is very impressive.

As of this writing, the hypocaust is open daily and admission is free, but please check official opening times. It is very easy to combine a visit to the hypocaust with a trip to the Verulamium Museum. 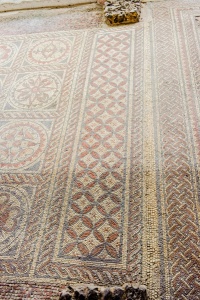 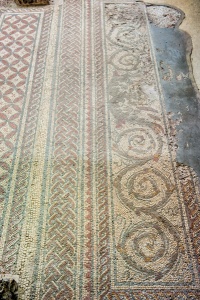 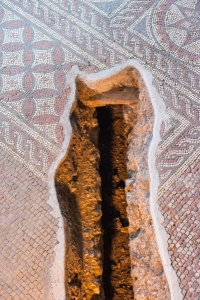 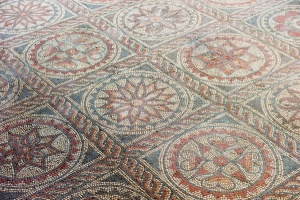 More of the central roundel designs 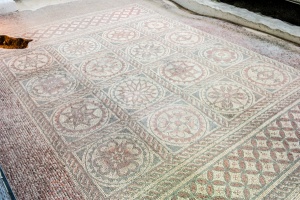 Look for the dip in the floor

More self catering near Verulamium Hypocaust and Mosaic

More bed and breakfasts near Verulamium Hypocaust and Mosaic