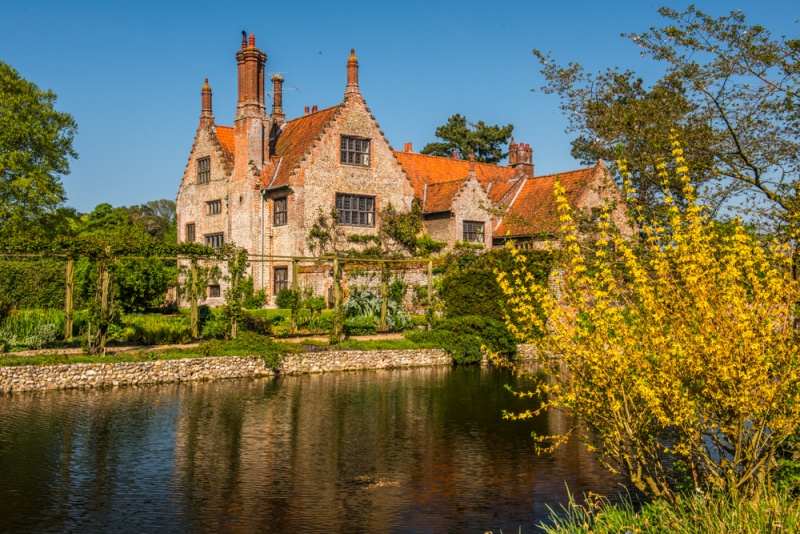 Hindringham Hall is a picturesque moated manor built by Martin Hastings, a courtier in the service of Henry Fitzroy, 1st Duke of Richmond and Somerset, the illegitimate son of Henry VIII by his mistress Elizabeth Blount. We do not know exactly when the Hall was begun, but a lease written in 1562 refers to the house 'now being builded and edified'.

Stone for the Tudor Hall was taken from local monasteries being suppressed by Henry VIII, particularly from Binham Priory, just a mile or two north. The Hall has remained externally unaltered since Hastings had it built.

The Tudor hall stands within a wide moat, which predates the house by several centuries. The moat was probably dug around AD 1150 and enclosed timber buildings. Before the Norman Conquest, the manor of Hindringham was held by the Bishop of East Anglia, based at North Elmham and then at Thetford. In 1094 the estate was granted by the Bishop to the monks of Norwich Priory. After the Priory was suppressed by Henry VIII the estate passed to the Dean and Chapter of Norwich Cathedral. 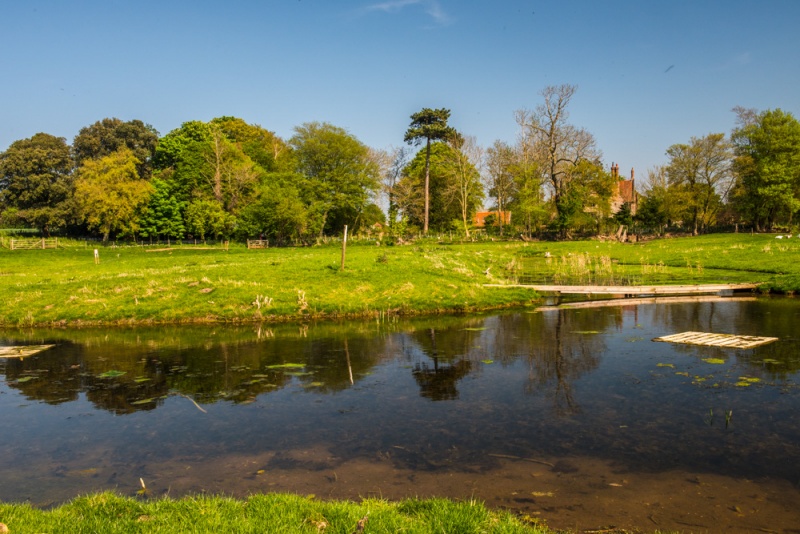 A community working for the Priory managed the nearby fish ponds, providing a supply of fresh fish, an important source of food during the medieval period.

The house was leased to tenants for several centuries after it was built and fell into a state of serious disrepair. The interior was subdivided to provide quarters for several families, and cattle were stabled on the ground floor.

It was in a state of complete dereliction by 1900 when it was rescued by Gerald Gosselin, a wealthy silversmith. Gosselin restored the house and refurnished the interior in Arts and Crafts style. Gosselin was confined to a wheelchair so one of his additions was a manual lift.

The moat's water level is controlled by sluice gates connected to the River Stiffkey, which runs through the grounds and was diverted to create the moat. The moat itself covers one acre and contains an area of one acre where the Hall stands. The moat is home to eels, carp, tench, and perch.

The house is built to a traditional Elizabethan E plan, with gardens both inside and outside the moat. The south-east wing may be even earlier than 1562. You cross the moat on a bridge built in 1562 at the same time as the house. The entrance is through a two-storey porch of flint and brick, with stone dressing on the ground floor. The house seems to sprout stepped gables, decorated with finials. The gables are original, though the finials date to the 19th-century restoration.

The hall interior is largely the result of a Victorian restoration, but the originally buttery wall remains, with a screens passage and a single-storey hall at the heart of the building. A wide Tudor staircase rises from the ground floor to the second floor.

The interior is an atmospheric space, with exposed timber beams and inglenook fireplaces. The tall windows contain old glass panes, identifiable by their distorted surfaces, and the window mullions are made of oak.

Rather than just be a pleasant green space, the gardens surrounding the Hall were intended from the start to provide fruit, vegetables, and herbs for the residents. There is a walled kitchen garden, and a formal garden area with pergolas and walls festooned with colourful clematis. 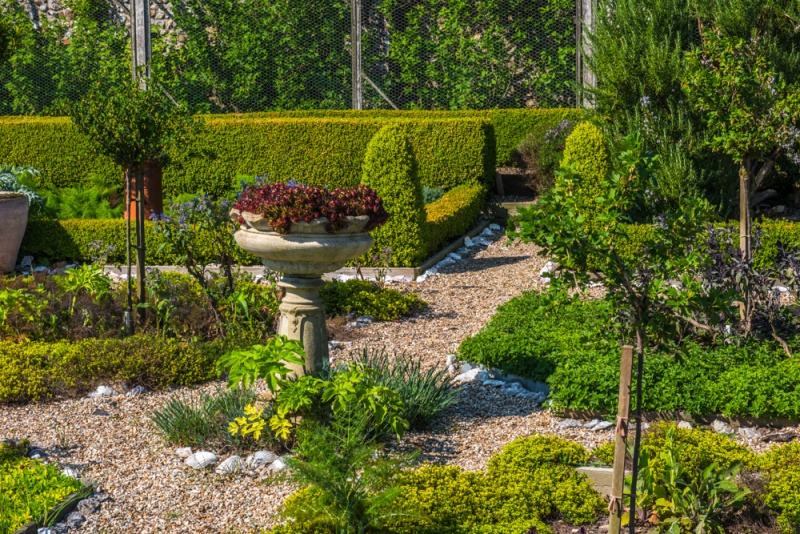 The formal garden beside the moat

Other garden features include a lovely nutwalk, a herbaceous border, and a beautiful daffodil walk linking the moat and the medieval fishponds. There is a small stream garden featuring primula and hellebores. A Victorian nut tunnel joins a wild garden to the west lawn. Flowers for the gardens are grown in an Edwardian greenhouse and also offered for sale to visitors.

Hindringham Hall was in the news in 2015 when the Norfolk Museum Service presented a 19th-century handmade jug depicting the Hall to the present owners. The jug had been given Gerard Gosselin, by Prince Frederick Duleep Singh of Elveden Hall, son of the last Maharajah of the Sikh Empire, in 1910. It had been given in error to the museum service in 1990 following the death of the Hall's owner.

The fishponds are visible as a series of five rectangular hollows ranging from 10-15m long and 0.5-1m deep. They are terraced into the slope of a hillside. Four of the ponds are arranged along the sides of the field, echoing the layout of the moat, while the fifth pond cuts across the centre of the field. Short channels connect several of the ponds. It is extraordinary to see such a complete system of fish ponds, with their various water management channels and sluices still relatively intact.

I came to Hindringham on one of their regular garden open days. It was a gorgeous sunny afternoon in May, yet only a few other people were there. I was admitted by a friendly chap at a folding card table by the garden entrance and given a map of the garden layout.

I wandered through the gardens that surrounded the moat, catching glimpses of the manor house through gaps in the foliage. A path led from a wooded area at one end of the gardens into an open field where the medieval fishponds were laid out. A signposted trail led around the ponds, stopping at various points where information panels pointed out interesting features of the medieval water management system. It really is an amazing medieval relic.

Back in the gardens, I wandered around the moat, past swans swimming placidly, until I came to the 16th-century bridge that crossed the moat, leading to the formal gardens behind the house. This is an idyllic space, bounded by thew moat on two sides and the Tudor manor of the other two.

As I was leaving the Hall I paused to compliment the gentleman manning the ticket booth on the wonderfully informative information sheets placed at strategic places around the grounds. It turns out he was the owner, Mr Charles Tucker, and had written the information sheets himself. It was obvious that he had a love for the Hall and its history, and seemed genuinely delighted to share that love with his visitors.

Hindringham Hall is one of Norfolk's hidden gems, a peaceful enclave of picturesque buildings set in a historic landscape of medieval fishponds, moats, and gardens. If the Hall was owned by the National Trust it would be one of the most heavily visited historic houses in East Anglia, but since it is privately owned it remains relatively unknown.

The garden is open regularly from spring through autumn, and the Hall itself is open on a few specified dates each year. Groups can also arrange special hands-on tours with the owners. 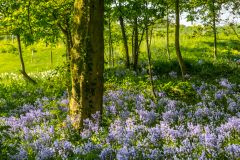 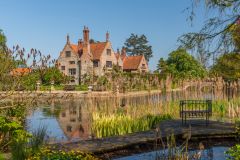 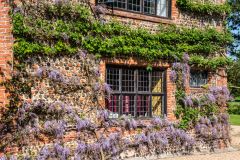 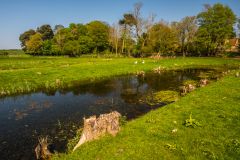 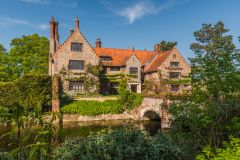