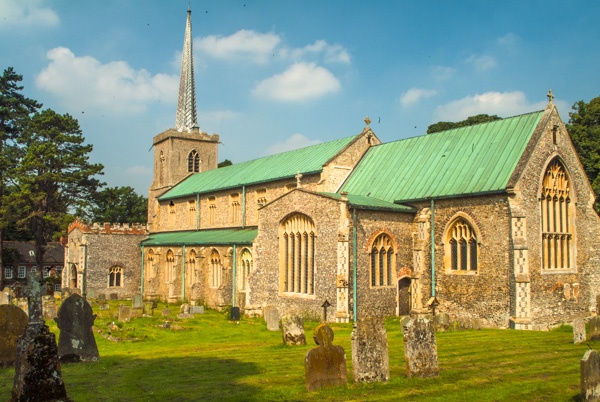 Little Walsingham has been one of the most popular places of pilgrimage in Britain since the Middle Ages, when pilgrims by the thousands flocked to this little Norfolk village to visit the shrine of Our Lady of Walsingham.

Though most modern visitors to the village come to see the Abbey grounds where the shrine was located, it would be a shame to miss the parish church of St Mary's, which is well worth a short diversion. The church is located off the bottom of the High Street, about a five-minute walk downhill from the visitor parking area (pay and display). On the way, you pass the old half-timbered gatehouse of Little Walsingham Abbey. 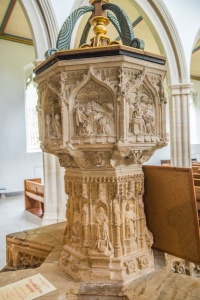 In some ways it is an unusual church, with a tower that seems much smaller than the length of the building would bring you to expect. Walk in the main west door and the full impact of the spacious and richly decorated interior hits you.

Directly in front of the east door, up a small flight of steps, is the crowning glory of Little Walsingham; the magnificent Seven Sacrament octagonal font. This octagonal style is a common one in East Anglian churches, but I cannot bring to mind any location where the craftsmanship has been better performed than here.

The font was, thankfully, one of the few parts of the original church to survive the fire, but the heat of the blaze damaged the stonework of the font, almost fusing it in places. So well regarded was the workmanship of the font that a plaster model was taken and exhibited at the Great Exhibition of 1851.

The other major artefact of note at Little Walsingham is the quite lovely tomb of Sir Henry and Lady Jane Sydney, located in a niche just a few steps north of the font. This is an alabaster cast of the original memorial, which was damaged in the 1961 fire. 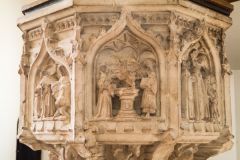 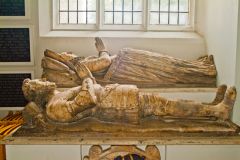 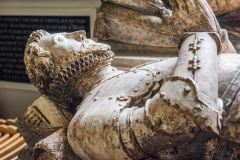 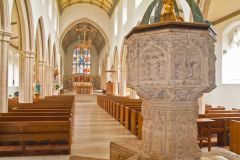 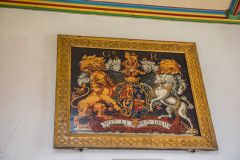 More self catering near Little Walsingham

Self Catering near Little Walsingham