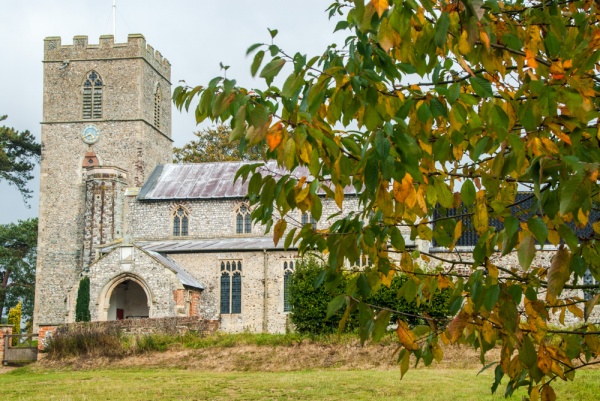 A lovely historic church dating back to the late Saxon period. The first church in Saxthorpe was built on a rise over the infant River Bure sometime in the 11th century. That church consisted of only a nave and a small chancel. A surprising amount of the masonry from this Saxon building survives.

The easiest place to see evidence of Saxon stonework is on the exterior south side of the chancel, near the small priest's door, where herringbone stonework is obvious.

In 1346 the Countess of Pembroke gained the right from Edward III to transfer the living of Saxthorpe to a new college she planned to found at Cambridge the following year. That college became Pembroke College, which owned the living for the next 5 centuries. Perhaps the fact that the College was responsible for the living is one of the reasons why so many of the medieval features of St Andrew's remain intact and uncluttered by restoration.

The church is entered by way of the south porch. Before you enter, look for a moment at the ancient door and you will see a large, round knocker. This dates from the 14th century and is a sanctuary knocker. If a criminal could reach the knocker, he could claim the right of sanctuary from justice, and stay unharmed within the church for a designated length of time.

As you enter the church, look left, to the west end, where a large arch separates the nave from the tower. In the 14th century, a door was inserted in the end wall of the Saxon church. This door is now the arch separating the tower from the medieval nave. Above the tower arch is a small Saxon window which would originally have been an exterior window - now it looks out over the nave. 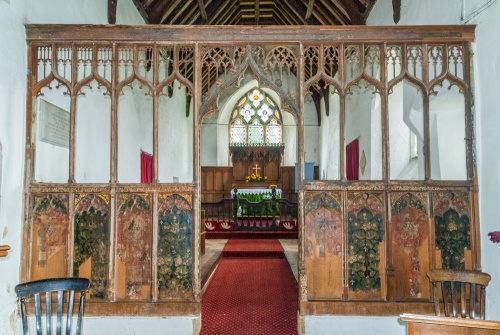 One of the most intriguing features of the interior is the large number of carved wooden roof bosses and corbel heads. Most are carved into grotesque faces, though some might well be contemporary portraits.

At the west end of the central aisle in the nave is a very large floor memorial to members of the Page family. One of the family was Peter Page, vicar from 1482 to 1536, who was responsible for the rebuilding of the nave. Look for a carved 'P' on several of the pew ends, a reminder of Page's work. Most of the pews have beautifully carved poppy head decoration, but into one pew is carved a medieval figure of an 'Agnus Dei', the Lamb of God.

The rood screen is medieval, and still has good amounts of colour despite obvious fading over the centuries. Unusually, the base panels are not decorated with human figures but show simple floral designs. To the left of the screen, near the pulpit, is a brass plaque commemorating the Venerable Cicely, an anchoress who maintained a cell in what is now the vestry. To the right of the screen is a large carved head thought to represent William Aylmer, Earl of Pembroke. The font is 14th century, and it bears a carved wooden cover dated 1621. 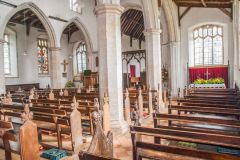 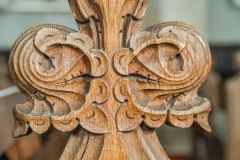 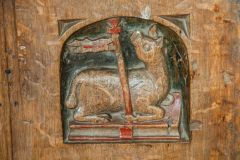 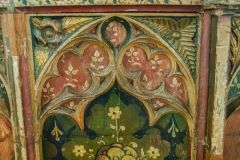 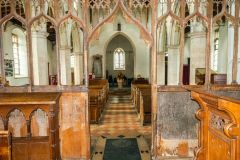 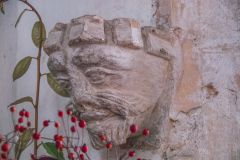 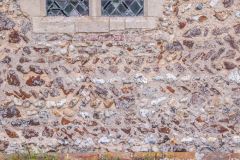