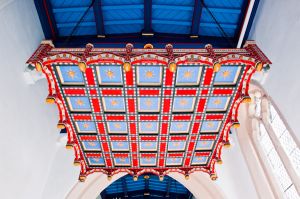 St Andrew's church in Bugthorpe probably dates to the Saxon period, and there are traces of early stonework in the lower sections of the tower. If the Saxon remains are scanty or non-existent, the same cannot be said for Norman features, which abound throughout the church. The font is Norman, with nailhead decoration about the rim of an otherwise plain bowl.

The real delight is the Norman chancel arch, which boasts intriguing carved capitals on each side. Unfortunately, most of these have been covered with plaster, which can make it more difficult to pick out details of the rich carving, but you can easily make out a figure of Christ in Majesty on a north capital.

Also on the north side is The Fall of Adam and Eve, and St Peter with the keys to Heaven. One interesting capital shows a serpent tempting a man.

The south capitals are even more interesting; here is a Green Man and a dove with a lamb. Beside the Green Man figure is a much worn Sheela-na-Gig. The church guide suggests that this was partly covered by plaster 'for decency'.

The east end of the church is 14th century, with a whitewashed sedilia and piscina in the sanctuary. There is a very fine 20th-century tester above the high altar, which is located at the crossing rather than in the east end. The clock was installed in 1891 and interestingly is owned by the village, not by the church.

When I visited the keyholder was across the road in the village shop/post office.