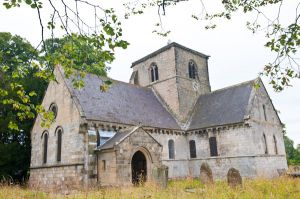 Bossall is the smallest parish in Yorkshire, and the church of St Botolph seems lost in a time warp. It is a late 12th-century church built to a cruciform plan, with a sturdy central tower. The first church here was founded by Bosa, Archbishop of York from AD 678-705, who may have given his name to the village.

That first church is thought to have stood next to Bossall Hall, and was part of a Royal Vill, or palace, protected by a moated enclosure.

That Saxon vill was replaced by a Norman castle, itself replaced by the current Hall in the 18th century. The village was depopulated in the Black Death, and today consists of just the church, Hall, Old Vicarage, and five cottages.

The current church has a 12th-century doorway and font and has stained glass by Kempe. It was built between 1180-1185 by Paulinus de Bossall, lord of the manor. In the chancel floor is a partial brass to Robert Constable (d. 1454).

There are 3 late 17th and early 18th century monuments in the chancel, and lovely Transitional stonework in the crossing. The font is an interesting Transitional design on later 12th-century columns and base, topped by a lovely Jacobean cover. On the north wall is a richly painted royal coat of arms dated to 1710.