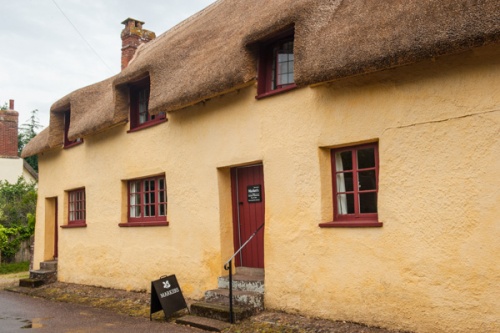 Marker's Cottage is a medieval Grade II listed thatched cottage in the picturesque village of Broadclyst. The cottage and nearby Clyston Mill are part of the National Trust's Killerton Estate.

The cottage is built of cob, a combination of mud and straw mixed together - the medieval equivalent of plaster. The interiors feature timbers blackened by the smoke of centuries, and an unusual painted medieval screen in the Parlour, with three panels, one depicting a likeness of St Andrew.

This screen is the most impressive historic feature of the cottage, and what is unusual is that it mixes together religious and secular images. The earliest panel appears to date from 1530, the date reinforced by a small Tudor ship in the background. The presence of St Andrew is a bit of a mystery as the local parish church is dedicated to St John the Baptist.

Two other panels date from slightly later, during and after the Reformation, so perhaps it is not surprising that they feature secular images. The paintings were executed using animal glue coloured with iron oxide, calcium, calcium carbonate, and carbon to produce a limited palette of red, yellow, white, and black. These were painted onto a primer coat of red lead or chalk. 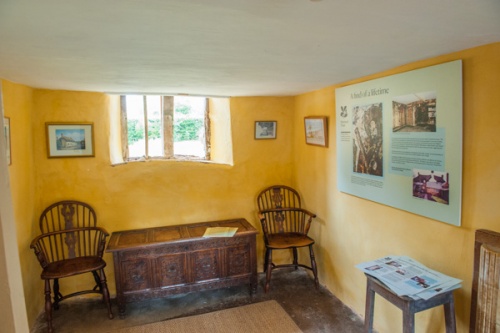 The cottage has three rooms on the ground floor, joined by a through-passage, and two bedrooms upstairs. Behind the cottage is a garden with a small summerhouse, also built of cob and thatch, and a blacksmith shop.

The cottage was built around 1450, but no written records can be found until centuries later. The name comes from the first recorded owner, Sarah Marker, whose name appears in the Land Tax Assessment of 1790-1814. By 1824 it had been divided into three separate cottages (remarkable when you consider that the single cottage would be considered small by modern standards).

The cottage passed to the Acland family of Killerton, and was gifted to the National Trust by Sir Richard Acland. You can clearly see smoke-blackened timbers in the roof, a reminder that in the medieval period the cottage would have been heated by a fire in the centre of the ground floor, with the smoke left to escape through the thatch. 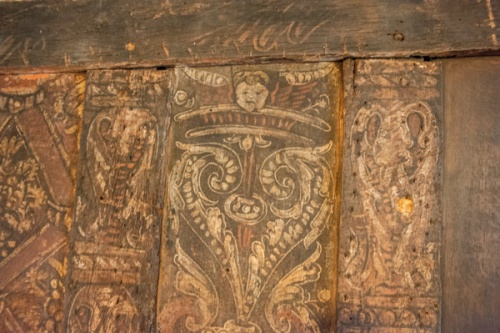 I have to say, the cottage is not well signposted; I used my satnav to locate the property and it was not until I was directly opposite the house that I noticed any signs. There is parking along the roadside, though do take care, as there is no sidewalk outside the cottage itself.

Now with all those caveats let me state that Marker's cottage is fascinating. It is a fairly simple property, with just three rooms on the ground floor open to visitors, and a couple of bedrooms on the first floor. There is a garden area behind the property with a path leading to a [modern] thatched summerhouse.

You could say that Marker's Cottage is not remarkable; you'd be right, but that rather misses the point, for the cottage is worth visiting precisely because it is a typical late medieval cottage, of the sort that most of the population lived in at that time. 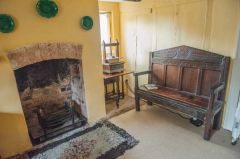 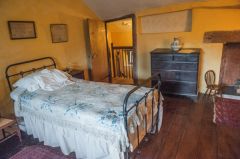 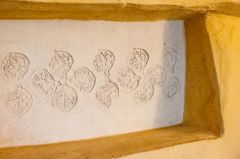 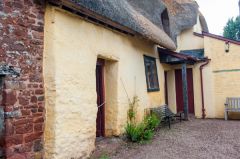 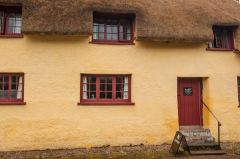 More self catering near Marker's Cottage >> Set in a quiet location half a mile from Broadclyst Village this semi-detached country cottage is an ideal holiday retreat. The property overlooks the National Trust Ashclyst Forest and is …
Sleeps 2