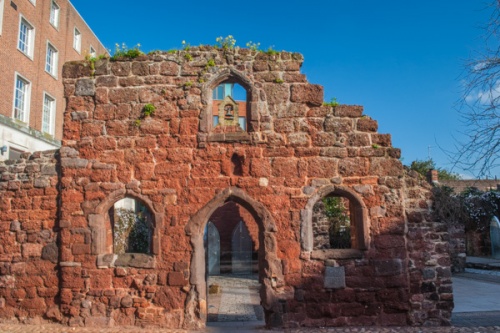 The most obvious remains belong to the almshouse, built in 1458 by Canon John Stevens of Exeter Cathedral. Canon Stevens intended his almshouses to provide accommodation for 13 men 'of good character' and he gave an annuity of 17s 4d to maintain the property.

Preference was given to men with a connection to the Cathedral or one of its canons. In the 17th and 18th century the almshouse regulations were relaxed to permit married couples, then tightened again to allow only widows or single women.

The layout was extremely simple; there was a large chamber with a fireplace and oven, with small cubicles, presumably for accommodation, giving access to a courtyard. It would have been an extremely basic form of accommodation for residents. 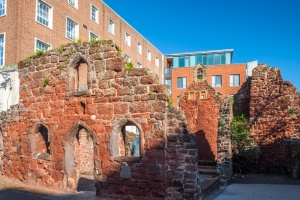 The west wall of the chapel

A chapel was built beside the almshouses, and you will often hear the site referred to as St Catherine's Chapel. The chapel is the most striking part of the ruins, and still stands to its full height, though with no roof or windows.

The chapel was once divided into two floors, linked by an internal stair, but there is no evidence of the upper floor now. The chapel eventually fell out of use and was used as a carpenter's shop.

By the late 19th century the medieval building had deteriorated and was declared unfit as a dwelling. New accommodation was built in Newtown and the old almshouse taken over by the Church Army as accommodation for the homeless.

Unfortunately, the almshouse site was struck by a German bomb in 1942, destroying the almshouses and the nearby 13th century Canon's House. The City Council decided not to clear the site, but landscape it as a permanent memorial to those who lost their lives in the bombing.

In the process of making the site safe the council tore down much of the almshouse walls, leaving the chapel as the best-preserved part of the site.

Excavations have revealed that the almshouse stands beside part of the 1st-century Roman fort established to house the II Augusta Legion in AD 50. A pair of granite posts within the almshouse ruins mark the location of a timber watchtower on the eastern rampart of the fort. 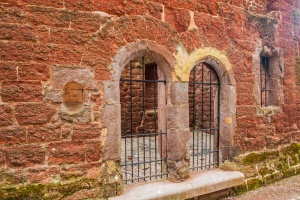 The almshouse overlies a 4th-century townhouse. When the dwelling was excavated in the 1980s a long corridor with several rooms leading off it were discovered. Several intact mosaics were uncovered under the almshouse, one of which was carefully lifted and transferred to Exeter Museum, where it is on public display. Another wing of the 4th-century house lies under the modern houses on Catherine Street.

The southern half of the site holds the remains of a 13th-century dwelling built for a canon of Exeter Cathedral. The house stood just within the cathedral precinct wall. It is perhaps hard to imagine when you see the site today, dominated by the chapel, that the canon's house was 3 to 4 times larger than the almshouses. The Canon's House still has a pair of medieval fireplaces, part of a large kitchen chamber.

The almshouse chapel is protected by modern glass doors, placed exactly where the original medieval doors stood. The glass panels are part of a modern art installation called Marking Time. Archaeological finds from the site are encased within the glass and are illuminated at night.

The lowest levels display Roman finds, and as you rise further up the glass the finds become more modern. Some obvious artefacts include a medieval pot and a glass bottle twisted by the heat of the 1942 bomb blast. Another innovative feature is that quotes from the almshouse records have been carved into the flagstones. It is fascinating to read the accounts, such as:

"Saturday the Twelfth Day of September 1772
They ordered That the Hatch belonging to the Dog Whipper's Room in St Catherines Alms House, be repaired."

St Catherines is an open site, located on Egypt Lane, off Catherine Street. 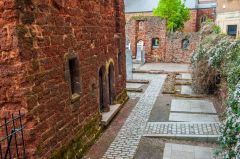 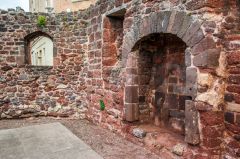 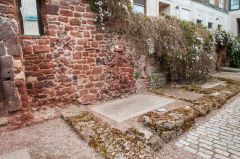 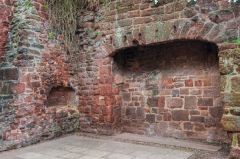 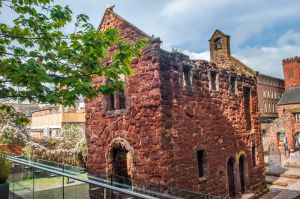