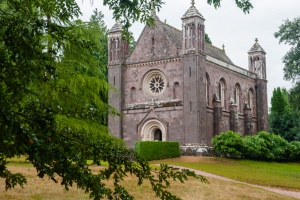 The mid-Victorian period saw a resurgence of religious zeal and, at the same time, renewed enthusiasm for Norman architecture. Sir Thomas Acland of Killerton House was caught up in the religious fervour of the day. He called in architect C.R. Cockerell, art historian and architect, to design a chapel in Neo-Norman style, modelled after the Chapel of Joseph of Arimathea at Glastonbury Abbey in Somerset.

Relations between architect and client were not always smooth; Cockerell once wrote an exasperated letter to Acland begging the peer to either produce a direct copy of the Glastonbury chapel or a completely unique work, but not an edifice that was part one thing and part another. I doubt Acland paid him much attention. He called in his son, Arthur to design the altar in neo-Norman style, and another son, Henry, designed the capitals.

The church is set out in collegiate fashion, that is, with benches running lengthwise down the nave, with a central passge. At the west end is a lectern and font, and a raised sanctuary with high altar at the east end. High above the altar is a rose window modelled on the 12th-century window at Barfreston, in Kent.

At the south east corner of the nave is a special bench for Sir Thomas Acland, made to his specifications. The lectern is carved from a single piece of oak and has carvings depicting the four evangelists.

Just for fun, here's a look at the rose window in the west front of the chapel, beside a photo of the 'real' Norman rose window at Barfreston. 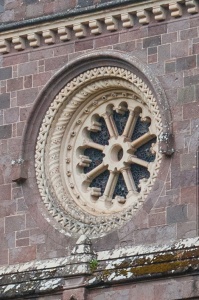 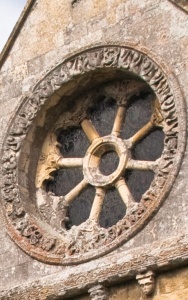 In the chapel is a small brass plaque to Second Lieutenant Henry Somerset Allan 6th Battalion, London Regiment (City of London Rifles), who died in 1916 from injuries received in battle and is buried in the military cemetery at Etaples, France.

From April-September there are choir concerts in the chapel.

The chapel is in the grounds of the National Trust's Killerton House (well worth a visit) but is usually accessible by a path opposite the end of Beare Lane, a short distance north of the main Killerton House entrance. 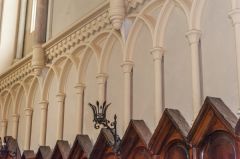 More self catering near Killerton Chapel