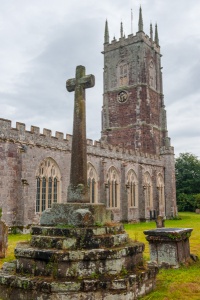 The church of St John the Baptist is notable for its 16th-century tower, thought to be the model for Cullompton, and for its wonderful collection of memorials. The church consists of a nave, chancel north and south aisles, south porch, and west tower.

The bulk of the church was begun during the episcopate of Bishop Stafford, 1395-1419, but the upper stages of the tower were only finished during the reign of Henry VII. Bishop Stafford's knot symbol can be seen carved on the capital of the nave pillar nearest the door.

There are six bays to the nave, with the arches springing from wonderful carved heads and figures of angels holding shields. In the chancel is a beautifully decorated three-seat sedilia, and set within the arches of the sedilia is an effigy of a knight in armour. The knight's head is supported by a small angel.

There are shields behind the effigy, but they do not bear any coats of arms. The effigy is thought to be that of Sir Roger de Nonant (d. 1350), the last of the Norman lords of the manor. The quality of the carving is exceptional, and the effigy is rightly considered one of the best in Devon from this period. 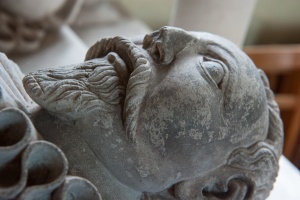 Set on the north wall is a beautifully carved and painted tablet showing a couple kneeling at a prie-dieu, or prayer desk, their hands clasped in an attitude of prayer. The inscription reads:

'The tombe and monument of Henry Burrough, Gent, who dyed the XIIth Decembr 1605, and Elizabeth his wife daughter of George Reynell, of Malston, Esq., who founded xii almes howses in Broadclist and gave weekely mayntenance to the poore and for repayracon thereof and provided yt viii sermons should be here yerely preached for theire better instruction'.

Burrough (aka Burrows) founded the Burrough's Almshouses in Broadclyst, which have been rebuilt, but are still in use.

In the south aisle is an ornate tomb to Edward Drew (d. 1622), Sergeant-at-Law to Queen Elizabeth and Recorder of Exeter and London. This shows Drew and his wife beneath a canopy supported on Corinthian columns. On one side is a tablet showing their seven children at a prayer desk. The detail of the carving is exquisite, with every hair on Drew's head crafted in beautiful detail. Drew owned Killerton House before it passed to the Acland family.

In the north aisle is a tomb to Sir John Acland (d. 1613) showing the effigy clothed in ruff and armour, propped up on his side, supporting his head on an elbow. His two wives kneel in pious attitude beneath Corinthian columns. Next to the tomb is the Ellen Window, with 14th century, but modern stained glass inserted in memory of Ellen Acland, daughter of the 14th baronet, who died tragically at a young age. 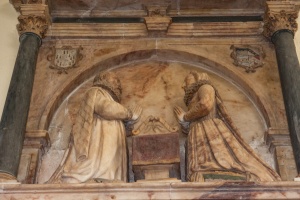 One unusual feature is the World War I memorial, set below a stained glass window in the south aisle. Rather than simply list the dead soldiers alphabetically, as most memorials do, it strictly divides the deceased by rank, with separate listings for officers, non-commissioned officers, and ordinary soldiers.

Though perhaps hard to understand by modern standards, it does point out the thinking of the time. The window is by the firm of Clayton and Bell, one of the great names in Victorian and early 20th century stained glass manufacture.

The church guide relates an amusing story; in 1832 Sir Thomas Acland, Lord of the Manor and owner of Killerton House, met one of his men leading a cart laden with wood through the village. 'What is in that cart?' asked Sir Thomas. 'If you please, Sir Thomas, angels,' the man replied. And he was telling the truth, for the wagon roof and rood screen had proved rotten and had to be taken down, to be burned as firewood.

Walk around the church to the west door of the tower, which is decorated with carved heads of mitred bishops. In the churchyard, near the path that leads down to the National Trust's Clyston Mill, is a medieval preaching cross, relatively complete. A local tradition suggests that the crosshead was discovered in a farmyard and restored to its place atop the shaft in the early 19th century. Just inside the churchyard is a set of stocks.

To be honest, I hadn't planned on visiting St John's; I was in Broadclyst to visit the National Trust properties of Clyston Mill and Marker's Cottage, but when I saw the tower of St John's, well, I couldn't resist. And I'm glad I couldn't for the church is a delight, primarily for the wonderful collection of medieval and Elizabethan monuments. If you get a chance to visit, please do, its worth it! 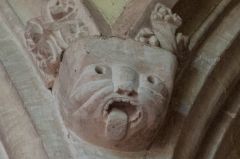 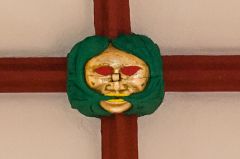 More self catering near Broadclyst

More bed and breakfasts near Broadclyst

Self Catering near Broadclyst