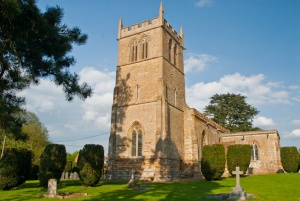 All Saints church in the Northamptonshire village of Cottesbrooke dates from c. 1300AD but was extensively rebuilt in the Georgian period. Originally built to a cruciform plan, the north transept was destroyed in the 18h century, creating the current 'lopsided' layout. A south porch was added at the same time.

Arguably the most interesting historical feature is the west tower. Look high on the tower and you can see heraldic shields bearing the arms of the Botevylan family, lords of the manor. William Botevylan served as rector of Cottesbrooke from 1285-1305 and was the son of the lord of the manor.

The architecture is largely Decorated Gothic, with large Geometric windows. The tops of the windows (the heads) were removed in the 18th century when a major rebuilding took place. The east wall of the chancel was rebuilt in 1840 when the current east window was inserted. On the gable above the window, however, is an original medieval cross.

Though All Saints is architecturally attractive outside, it is really the internal furnishings that make it worth exploring; the 18th-century renovations introduced a wealth of Georgian furniture and a new internal layout that mask the medieval origins of the church. The very useful church guide calls the Georgian furnishings of All Saints 'one of the most complete Georgian interiors in the Midlands'. 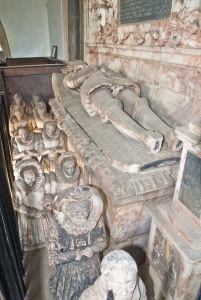 The most obvious feature is the box pews, including a remarkable two-storey Manorial Pew on the south side of the nave. The top storey of this startling pew was reserved for the Langham family, who owned Cottesbrooke Hall from the 17th century until well into to the 20th century.

It is an evocative statement of 18th-century fashion and values to see the special seating area for the lords of the manor and their family, complete with a fireplace for comfort, with a lower set of seating for their servants.

The Manorial Pew is set within the south transept opening, facing the pulpit, so that the family was out of view of the 'regular' worshippers, yet seated with a good view of the rector. The pulpit is a very fine 18th-century three-decker, with a low desk for a Clerk, middle desk where the rector led the service, and the pulpit proper for delivering the sermon.

The pulpit has a finely carved staircase and is topped with a lovely Georgian sounding board to amplify the rector's voice. Both the pulpit and Manorial Pew date to shortly after 1750, and are largely made from mahogany in a style reminiscent of Chippendale. 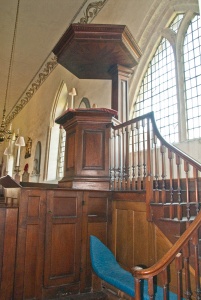 Over the south door is a small area of 18th-century painted text, a common motif during the Georgian period. When the iconographic wall paintings of the medieval period were destroyed (or simply whitewashed over), it became popular to paint instructive lines of Biblical text, which were much more acceptable to Anglican sensibilities.

There are numerous 17th and 18th-century memorials to members of the Langham family throughout the church, including a rather remarkable neo-classical urn-shaped monument to Sir William Langham (d. 1812). This is made of Coade stone, a form of terracotta, and sculpted by John Bacon, a popular late Georgian sculptor. Bacon also created the tablets to Lady Langham (d. 1810) and Marianne Langham (d. 1809). 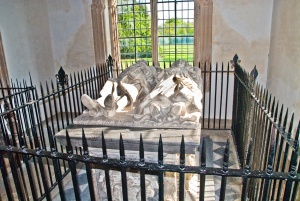 By far the most interesting of the tombs - and to my eye, the main reason to visit All Saints - is a striking monument in the south transept to Sir John Langham (d. 1671). Sir John was a wealthy London merchant and rose to become a City Alderman. His recumbent effigy depicts him in his aldermanic robes of office.

The sculptor responsible for creating Sir John's tomb was Thomas Cartwright, who worked extensively with Sir Christopher Wren on his London churches. Cartwright received £290 for creating the monument, which is considered his finest work.

Nearby is an earlier memorial to John Rede (d. 1604), a member of the family who owned Cottesbrooke before the Langhams. Rede's memorial is typical of the early Jacobean style, with strapwork details and a kneeling row of children beneath Rede and his wife. I personally much preferred the Rede memorial; though worn, it has a wonderful vitality that the later Langham memorial, though skilfully sculpted, seems to my eyes to be missing. But, then, I'm always most interested in older stuff!

Cottesbroook's church is included in Betjeman's Best British Churches for good reason. It's a lovely rural church, with fascinating Georgian fittings and several very interesting 17th-century memorials. Its well worth a visit - especially if you can time your trip for a day when Cottesbrooke Hall is open to the public. 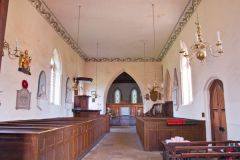 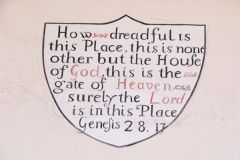 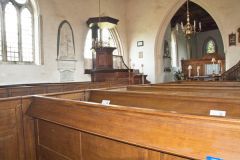 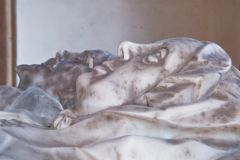 More self catering near Cottesbrooke

The Granary at Fawsley - 14 miles
Daventry, Northamptonshire
Stay from: £50.00

More bed and breakfasts near Cottesbrooke