HERITAGE HIGHLIGHTS:   The largest and most complete Saxon church in the country 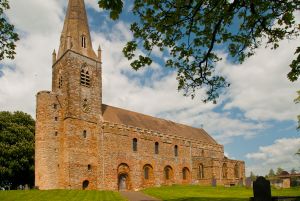 All Saints Church in Brixworth is the largest Saxon church in England, indeed it is probably the largest Anglo-Saxon building of any kind. It was founded around AD 680 by monks from Peterborough, and unlike some early churches, has retained much of its Saxon architecture. The building is huge, so it comes as a bit of a surprise that it was once even bigger, with a porticus on both the north and south of the nave.

Why was it so big? Well, one theory is that Brixworrth was a royal foundation, possibly a place known to us only as 'Clofesho', used for important church council gatherings in the 8th and 9th centuries.

The structure is best appreciated from the south elevation, where you can see the four-bay nave with the three-light clerestory above. You can clearly make out where the porticus once stood. The blocked door arches are of two orders and incorporate bits of Roman tile.

And that points to a bit of a historical mystery; the origin of the materials used by the 7th and 8th-century builders. The lower section of the church is a mix of igneous rock from the Charnwood area, limestone from Towcester, and Roman brick, possibly from Leicester.

Very little, if any, of the lower section of the church is made of local materials, which in itself is extraordinary in a period where transportation of building materials was so difficult over poor or non-existent roads.

There are several unique Saxon features. One of these is a ring crypt at the east end, surrounding the apse. This ring crypt, in the shape of a stilted semi-circle, is one of only three such crypts in England, and probably served as an ambulatory for pilgrims. Another unique feature is the external stair turret that climbs the west tower. This is one of only four such turrets in the country. 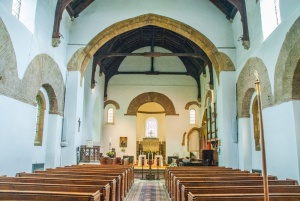 One of the most intriguing treasures of Brixworth church is a stone reliquary discovered during repairs in 1809. This so-called Brixworth Reliquary is a 14th-century container intended to store saintly relics. When the reliquary was opened it was found to contain a human throat bone wrapped in cloth.

The cloth was probably inscribed with the name of the saint to whom the bone was attributed, but unfortunately, the medieval cloth disintegrated when exposed to the air, and the name was never discovered.

One suggestion is that the bone was that of St Boniface, who was very popular in the area during the medieval period. The reliquary is not on view, but an exact model can be seen in a display case at the west end of the church.

Just inside the 12th-century south door is another Saxon treasure, set into a niche. This is an ancient stone carved with an eagle's head. This may once have been part of a Roman villa located near Brixworth. Near the pulpit is another stone fragment; the lower section of a Saxon cross, which was discovered by chance in the vicarage garden in 1897.

One of the most interesting interior features is the Lady Chapel, otherwise known as the Verdun Chapel after Sir John de Verdun (d. 1276), whose tomb is in a recess on the south wall. At the entrance to the Lady Chapel is a beautiful 15th-century screen. This was moved here from its original location in front of the apse and has been repainted with what is thought to be the original medieval colour scheme.

If you want to learn more about this wonderful Saxon church it might be worth your time to investigate the Friends of All Saints' Church, Brixworth website. The Friends maintain a small Heritage Centre near the church, where you can find old photographs, artefacts, and historical records.

Brixworth church is an extraordinary historic treasure and is well worth taking the time to explore.

More self catering near Brixworth, All Saints Church >>

The Granary at Fawsley - 14.8 miles
Daventry, Northamptonshire
Stay from: £50.00

More bed and breakfasts near Brixworth, All Saints Church >>