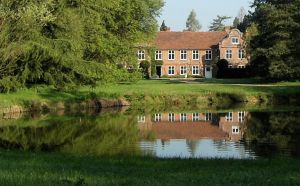 Saling Hall
Saling Hall is an Elizabethan manor set in an attractive 12-acre modern garden with an attached arboretum. The arboretum features rare trees and classical ornamentation arranged around a serpentine pond.

Beside the house to the east is a water garden, while to the west is a 17th-century walled garden with old apple trees and mixed borders providing colour.

Note that the gardens at Saling Hall are not generally open to the public, except for special charity garden scheme days. Visits by written appointment. See the Saling Hall website for current details.

The manor of Saling dates to the early 12th century, but the house was built around 1570 by Maxey family. The house later passed to the Carter family of Shalford. It was Martin Shalford who built the walled garden in 1698 and remodelled the house in Dutch style.

More self catering near Saling Hall >>