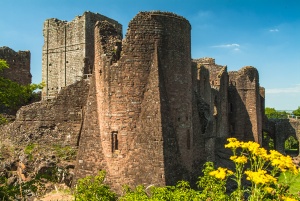 Goodrich Castle is one of the finest examples of military architecture in England, located on a spur of land overlooking the River Wye, on the border with Wales. The castle is almost certainly named for Godric Mappestone (or Mappeson), who is mentioned in the Domesday Book as owning land in the area.

The first mention of a fortress on this site comes from 1101, but the castle must surely have been built before then, probably on the site of an earlier Iron Age fort. There are earthwork defences surrounding the hilltop that must predate the Norman fortress.

The location makes perfect strategic sense, guarding a major crossing of the River Wye, the traditional border between Wales and England.

The first castle was probably a simple timber structure with a perimeter wall surrounding a tower. No trace of the timberwork remains, however. A small stone keep was erected sometime in the early 12th century, perhaps during the Civil War between Stephen and Maud or during the reign of Henry II that followed.

Henry's royal accounts do not tell of any major expenses during the period however so it is equally possible that the stone keep was built by Lord William Fitz Baderon of Monmouth during the Civil War. We do know that Baderon seized Goodrich during the Anarchy, and the defences were strengthened either during his brief tenure or under Gilbert de Clare, to whom the castle was transferred after the war. 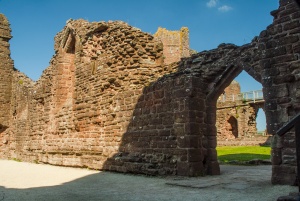 The keep is a very simple structure; tall, square in layout, with narrow windows and pilaster buttresses. The entrance was on the first floor, reached by an external stair or ladder. The entrance door was later converted to a window and a new door inserted beneath it.

The original Goodrich Castle was thus a very a simple structure, but that would change in 1204 after King John granted Goodrich to William Marshall, Earl of Pembroke and one of the most powerful knights of medieval England.

A stone curtain wall was built to enclose the site, with mural towers for added defence. But the major work at Goodrich took place under a later Earl of Pembroke, William de Valence. De Valence rebuilt the earlier castle in the style of Edward I's concentric castles in north Wales, a style that is rare in England.

De Valence's 'new look' Goodrich was square, with a rock-cut ditch providing extra defences to the south and east. A massive curtain wall surrounds the hilltop, with large round towers at three corners and a massive gatehouse at the fourth. The towers rise from wide spurs, creating a cylinder shape with an enlarged base.

This would have made a direct attack at ground level almost impossible and countered any attempt to undermine the walls. William de Valence's son Aymer added a concentric outer wall to the north and west, and a semi-circular barbican to protect the gatehouse.

A second ditch protected the barbican, so that an attacking force would have had to advance at an angle, exposed to fire from the curtain wall. If they managed to take the barbican attackers would then have to cross the inner ditch causeway and break through two portcullises, two gates, and a drawbridge protecting the gatehouse passage. 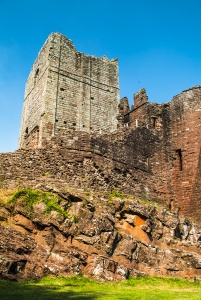 Inside the curtain wall were ranges of domestic buildings, including a hall, kitchen, and solar block (private apartments for the lord and his family). A small chapel was built into the gatehouse tower, and quarters for guards attached to the northwest tower.

When Aymer de Valence died in 1324 Goodrich passed to the Talbots, later Earls of Shrewsbury, who added curtain walls to the barbican and outer ward. The Talbots eventually abandoned Goodrich in favour of more comfortable residences, and it the castle mouldered away until the Civil War, when it was garrisoned by Royalist forces.

Parliament forces besieged Goodrich in 1645, but the defenders held out. Parliament returned in 1646 and in a siege lasting two months they managed to build mines under the walls, and also cut off the water supply, forcing the defenders to surrender.

The castle was slighted so that it could not be used again, leaving it in a semi-ruinous state. After the castle came into state guardianship in the 1920s it was restored so that we can see just how impressive it must have been.

It is easy to say that this or that castle is 'one of the finest' in the region, or 'not to be missed', but in the case of Goodrich, it really is one of the best examples of a medieval castle in England. Though not large, the compact site is enormously interesting, and much of the castle defences survive; enough to really help us visualise what an imposing and impressive place it must have been. It really is not to be missed! 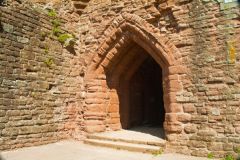 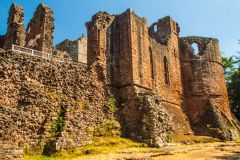 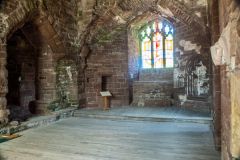 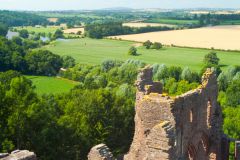 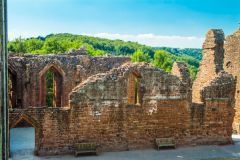 More self catering near Goodrich Castle

Self Catering near Goodrich